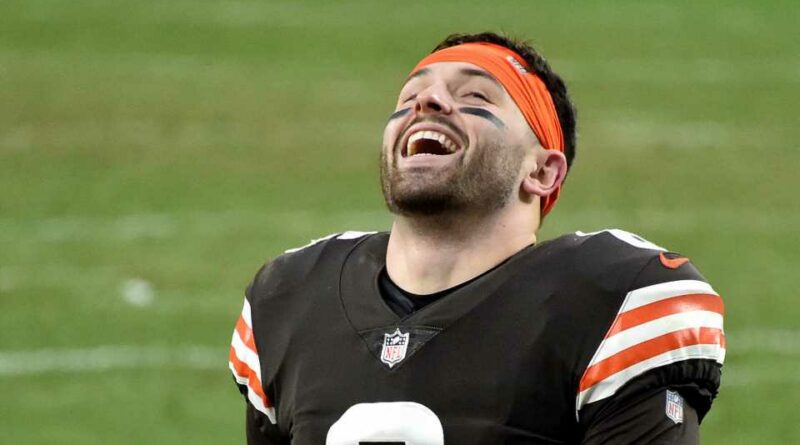 The Browns needed two yards to clinch their first playoff berth since 2002. Baker Mayfield headed to the sideline during a Steelers timeout, and he first heard the final play call from his backup, Case Keenum. He thought it was a joke.

Cleveland has the best running back duo in the league with Nick Chubb and Kareem Hunt. But Mayfield thought he’d heard that coach Kevin Stefanski wanted the Browns QB to run for the first down himself.

“I thought he was joking at first because I didn’t hear it from Kevin,” Mayfield told reporters after the game.

But then Stefanski said the play again, and Mayfield heard him this time. The ball would indeed go to Mayfield, who had fumbled three times (losing two) in Week 16, adding to his initial disbelief.

Mayfield took a shotgun snap and took off running to his right behind a convoy of blockers that included Hunt. Needing two yards, Mayfield picked up about four before leaping up on the sideline to emphatically signal first down.

The Steelers chose not to use their final timeout, and Mayfield knelt down once to seal the 24-22 victory that sent Cleveland to its first postseason since 2002. Like that year, the Browns and Pittsburgh meet in the first round of the playoffs.

As it turns out, that carry also gave Mayfield his single-game career-high in rushing yards, as he finished with 44 on the ground. That included a 28-yard first-down run on an earlier drive that culminated in a Cleveland touchdown. Mayfield also threw for 196 yards and a touchdown through the air Sunday.

Mayfield hasn’t been without his critics in his three-season Browns career, but he’s risen to a new level in the second half of the 2020 season, and that was enough to push the Browns to recently unprecedented heights. Despite a Week 16 loss to the Jets jeopardizing Cleveland’s postseason dreams, Mayfield and company had just enough in Week 17 to bounce back. And with the game on the line, Stefanski trusted Mayfield to get the job done.

“He’s tough,” Cleveland’s Myles Garrett told reporters after the game. “I never had a doubt in my mind that he was going to fight for every yard and get that first down. When it was in his hands, I was sure we were going to be all right.”