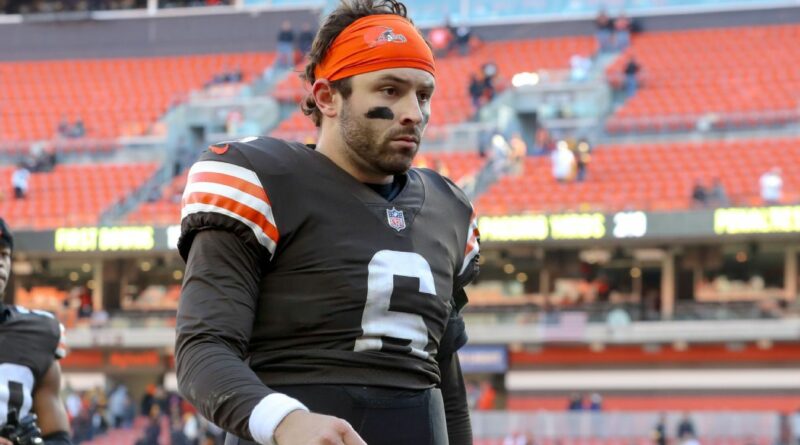 Mayfield’s reaction to it?

“Those are probably the same fans that won’t be quiet while we’re on offense and trying to operate,” the Cleveland quarterback said Monday. “So, don’t really care.”

Mayfield declined to speak to reporters following a game in which he posted a QBR of 8.6 (scale of 0-to-100), the third-worst QBR performance of his career. Mayfield completed 15 of 29 passes for just 176 yards. He did toss a touchdown pass to Nick Chubb, but also threw two interceptions, including one in the fourth quarter, which prompted a cascade of booing inside FirstEnergy Stadium and led to a Lions field goal.

Mayfield’s first interception came on Cleveland’s second possession, when he overthrew Jarvis Landry, who seemed to be wide open breaking down the middle of the field.

Mayfield had never skipped a postgame interview before.

“I’ve never dodged any questions or hid away from that. … Just frustrated, removed the emotions and all that from it. Just decided it was best to wait,” he said, when asked about it Monday. “Not one part of that’s about not being accountable. I’d be the first to tell you I played like s—. I don’t owe that to you guys, I owe that to my teammates.”

After taking a knee to end the game, Mayfield also immediately walked to the locker room, instead of shaking hands with the Lions or celebrating the victory with his teammates on the field. He was asked about that, as well.

“My guys know that all I care about is winning. But I’m going to be frustrated if I do stuff to make it harder on us. And I did yesterday. And that’s just flat-out where it was,” Mayfield said. “But I’m never going to take winning for granted. That’s something that’s very hard to do in this league. And it hasn’t been a very common thing around here for a long time. So I’m just frustrated with how I played. That’s how I’ve always been. (My teammates) know how I’m going to come back and attack this week.”

Mayfield, who now ranks 27th in QBR in the league, has been battling various injuries throughout the season, including a torn labrum to his non-throwing shoulder since Week 2. He’s also been dealing with knee and foot soreness this month. Sunday, Mayfield was limping around for much of the second half, though never came out of the game.

“He doesn’t feel 100 percent,” said Browns coach Kevin Stefanski, who added he never considered taking Mayfield out of the game against the Lions. “He’s definitely battling.”

For all their struggles, the 6-5 Browns can jump back into the AFC North race with back-to-back games coming up against the division-leading Baltimore Ravens. And despite the ongoing injuries, Mayfield said he’s still planning to play Sunday night in Baltimore.

“Big-picture wise, everybody wants to act live the world’s falling,” Mayfield said. “No, we haven’t played to our potential and we know that more than anybody. … So, we know what’s at stake. And we know what we need to do.”

Kraft on Josh Gordon's suspension: 'It makes us sad'