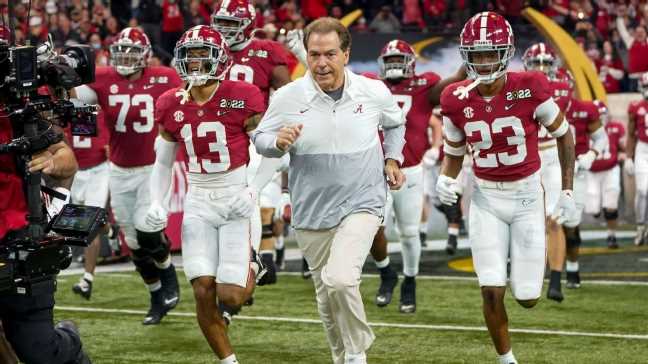 Despite Monday night’s loss to Georgia in the College Football Playoff National Championship Game Presented by AT&T, oddsmakers have pegged Alabama as the team to beat next season.

Caesars Sportsbook on Monday opened Alabama as the national championship favorite for next season at 5-2, ahead of Georgia at 9-2 and Ohio State at 7-1.

The odds hit the board before the Bulldogs knocked off the Crimson Tide 33-18 in the CFP title game in Indianapolis. Alabama, with quarterback Bryce Young expected back, remained the favorite for next season even after the loss to the Bulldogs.

Oklahoma and Michigan are expected to be in the mix next season, each opening at 15-1 to win the national title at Caesars Sportsbook.

There also will be plenty of offseason hype for USC, which opened at 20-1 to win the title. Adam Pullen, assistant director of trading for Caesars Sportsbook, said USC’s 20-1 odds reflect prized quarterback Caleb Williams potentially joining his former coach at Oklahoma, Lincoln Riley, in Los Angeles.

The Trojans entered last season at 60-1 and finished with only four wins.

“Some people might say their odds are too low even with Williams,” Pullen said. “But some coaches have come in and made huge differences right away, and the sentiment is that Lincoln Riley is one of those coaches.”