Home » NFL » Bears Pro Bowl pass-rusher Robert Quinn: Referees 'controlling the game a little too much' in loss to Vikings 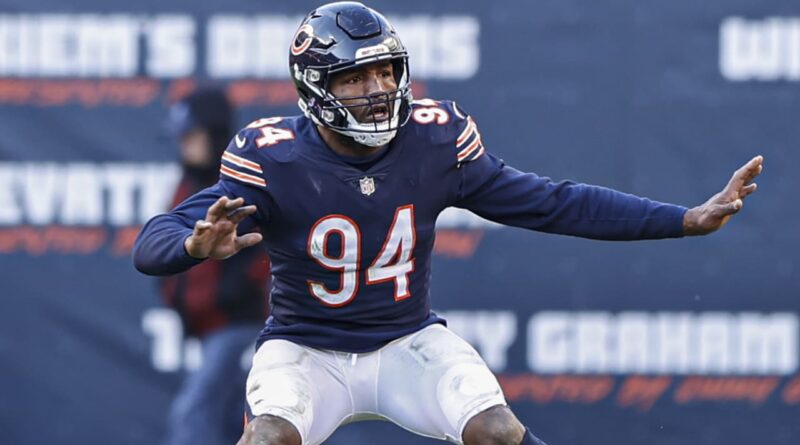 The Chicago Bears took issue with several penalty calls during Monday night’s 17-9 home loss to the Minnesota Vikings, in which they were flagged nine times for 91 yards, five of which were the personal foul variety, including a fifteen yarder on coach Matt Nagy for arguing a call.

After the game, Bears pass-rusher Robert Quinn, named to the 2021 Pro Bowl team, said that refs have too much control.

“Some of these calls are starting to get a little crazy,” he said, via ESPN. “These refs seem like they’re controlling the game a little too much. So, when a play is clean, and they’re throwing a flag for something that they thought they could change a game [with] just by one flag … let guys play ball. If this was a couple years ago, half of this stuff wouldn’t even be called. But now, they got so many of these stupid rules, they dang near in a ref’s hands [and] could change the game in any given moment.

“I think they need to go check the refs they hire and not our coach.”

Nagy was flagged after arguing a call on safety Deon Bush, who was penalized for a hit to the head of Vikings tight end Tyler Conklin. The NFL’s officiating department defended the call in a tweet during the game.

Unnecessary roughness was correctly called on CHI 26 for making forcible contact to the head of a defenseless receiver with his helmet. The foul was properly called by the Back Judge. #MINvsCHI pic.twitter.com/DSMWn96dEx

Nagy disagreed with the determination and used “inappropriate language” to make his point, according to referee Scott Novak.

The Bears lost their composure several times, leading to penalties that kept Vikings drives alive. And the calls weren’t one-sided, with the Vikings getting flagged seven times for 54 yards and linebacker ﻿Eric Kendricks﻿ being ejected from the game for a late hit to the head on a sliding Justin Fields.

It was a chippy, ugly game all around.

“I know that it helped us a couple times because they got 15-yard penalties,” Vikings coach Mike Zimmer said. “We try to be a disciplined football team and not do those kinds of things. But when you get your manhood challenged sometimes, you react, and you just have to keep — you know, I talked to the offense, I talked to the defense, about being composed and just doing our job.”