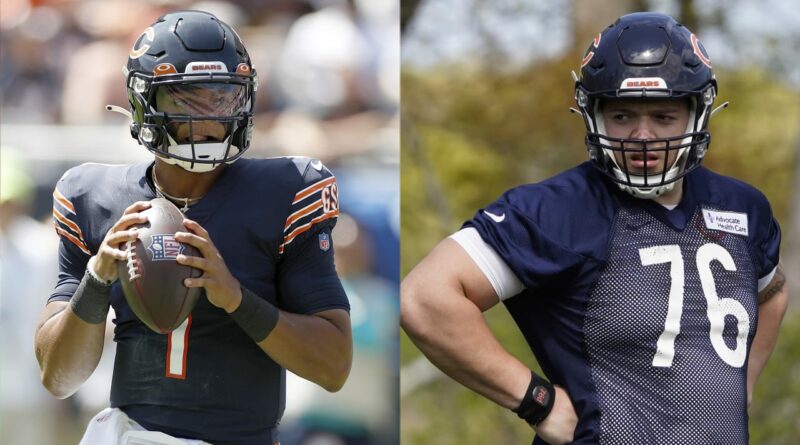 The Chicago Bears’ top two draft picks are dealing with injuries. One is much more serious than the other.

Coach Matt Nagy said Wednesday that first-round quarterback Justin Fields would be “pulled back” in practice today as he deals with a groin issue. Nagy noted that the team would be “extremely conservative” with Fields, but the plan is to get him ready for Saturday’s preseason game versus the Buffalo Bills.

“He was a little sore, and Justin is the last one that’s gonna tell you that’s an excuse,” Nagy said. “He’s not going to use that excuse. He was pissed off with some of the throws and just the way in general yesterday we were all a little bit, I didn’t think offensively we had a very good day. We were able to watch the film last night, go through it and correct it and see why and stuff. For us, we’ve got to be smart. We want to be smart, and it doesn’t make sense right now to push the limits with him and take a chance of making it more sore.”

Nagy didn’t sound too concerned about Fields’ groin issue, particularly given the plan is for the rookie to play Saturday. If team doctors were worried it’d be a lingering issue, there is no way the Bears would put him on the field for a preseason game.

On the flip side, second-round offensive tackle Teven Jenkins will undergo back surgery, Nagy announced.

“The goal is to get him back this season,” Nagy said.

Jenkins hadn’t participated in any training camp practice while dealing with the injury.

Viewed as a first-round talent, Jenkins slipped into the second round, where the Bears traded up to snag the Oklahoma State product. Chicago brass has said throughout the process that they were aware of Jenkins’ back issues in college, which presumably led to his draft-day fall.

“We were aware of the back issues in college, but these symptoms are new,” Nagy noted.

New symptoms are concerning, particularly when it comes to back injuries for offensive tackles.

While Nagy was optimistic about Jenkins returning, it’s possible the Bears could redshirt the rookie for his entire first season. Either a 39-year-old Jason Peters plays well enough, the Bears are playoff contenders, or the offense collapses under an already banged-up O-line and the season is a wash. Neither of those outcomes portends to Jenkins playing a significant role, assuming surgery keeps him out deep into the campaign.

The Bears cut Charles Leno Jr. earlier this offseason, with the thought being that Jenkins could step right in and start at left tackle. It seemed a head-scratching move at the time, given Jenkins was a rookie with injury concerns. It looks even more oddball, given the “new” symptoms that led to Jenkins surgery.

Along with the rookies, Nagy added that tight end Cole Kmet would have his practice reps curtailed as he deals with a hamstring issue. Like with Fields, however, the coach noted it was simply precautionary and he’s not worried about it long term.

“We’re gonna be smart with them, we’re gonna pull back and be conservative there,” he said. “There’s nothing to read into with either one of those guys. We’re just being smart.”