The NFL approved a resolution Friday to adjust the AFC playoffs for the 2022 season in response to potential inequities resulting from the cancellation of the Bills-Bengals Week 17 game. The Monday night matchup, which was canceled following Damar Hamlin’s frightening incident, would have had a wide-ranging impact on the AFC playoff picture.

Within Friday’s resolution are multiple scenarios in which the AFC Championship Game would be played at a neutral site to address a discrepancy in total games played. The resolution could also affect Super Wild Card Weekend.

With the cancellation of Cincinnati’s Week 17 game, the Bengals have clinched the AFC North division title, regardless of the outcome of Week 18’s meeting between the Ravens (10-6) and Bengals (11-4). The Bengals can no longer clinch the AFC’s top seed, though they can secure the No. 2 seed with a win over the Ravens and a Bills loss to the Patriots this weekend.

If the Bengals lose to the Ravens on Sunday, and the Chargers beat the Broncos, the Bengals (as the No. 3 seed) would face the Ravens (No. 6 seed) on Super Wild Card Weekend. The Bengals, as division champions, would typically have home-field advantage in this scenario. But because Baltimore will have then beaten Cincinnati twice this season, and the two teams will have played an unequal number of games, the approved resolution calls for the site of the game to be determined by a coin flip.

Bengals coach Zac Taylor pushed back against this part of the resolution on Friday prior to it being officially approved.

“It seems like there are positives for a lot of teams and just negatives for us,” Taylor said, per the Cincinnati Enquirer.

“But what we recommended and what the membership passed was allow this game to obviously have the ultimate meaning this weekend.”

Taylor stated his belief that the league should follow win percentage to determine home-field advantage in the postseason, as is established NFL protocol. If Baltimore wins, both teams would finish with 11 victories, while the Ravens would have one more loss on their record, leaving them below the Bengals in terms of win percentage.

McKay explained why the NFL chose to adopt Friday’s coin-flip scenario instead.

“It’s not necessarily that (the win percentage rules) weren’t followed. It was that you had a circumstance that wasn’t necessarily captured,” McKay said, invoking the NFL’s scheduling flexibility during the COVID-19 pandemic as an example. “We don’t capture everything and every rule in every policy manual. And sometimes when you face situations, you have to try to make adjustments, and this was one of those adjustments.”

Instead of simply leaving the site of the game to win percentage, the NFL is attempting to make things as fair as possible for both teams, per McKay, given the unprecedented circumstances.

Taylor, meanwhile, saw the resolution as being unfair to the Bengals.

“As far as I’m concerned, we just want the rules to be followed,” Taylor said. “When a game is canceled, you just turn to winning percentage to clarify everything so we don’t have to make up rules. There’s several instances this season when a club is fined or people in our building are fined and we’re being told, ‘Follow the rules. It’s black and white. It’s in the rulebook.’ So now when we point out the rules and you’re told, we’re going to change that, I don’t want to hear about fair and equitable when that’s the case.”

Taylor didn’t offer much on how a potential coin flip would work for the Bengals, but did admit “we’re not good at coin flips.”

The NFL said details on a potential coin flip have not yet been finalized.

Taylor and the Bengals can set aside any consternation regarding the matter by going out and winning this weekend. It’s far from a guaranteed outcome, of course, but would render his complaints moot.

“We were told what it was in the team meeting this morning,” safety Jessie Bates said Friday, via the Enquirer’s Charlie Goldsmith. “At the end of the day, we got to go win a game this week and whoever we play next week, handle that as well.

“We all got the same goal here. Make sure we’re in the best situation to win a Super Bowl.”

Knowing this is possible, Taylor took a stubbornly confident stance entering the weekend and the postseason ahead.

“What’s in front of us is to win this weekend and reclaim an opportunity for a home game,” he said.

“Let us play seven home games and nine road games and then try to take a home playoff game away. That’s what this team is built for.” 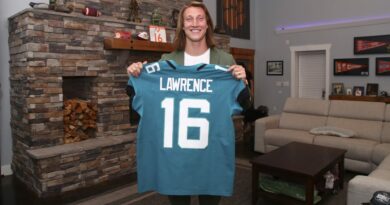 Jacksonville Jaguars believe they have found their savior in Trevor Lawrence

Tom Brady thanks fans for support in Instagram post: ‘I know I still have more to prove’