Bengals wide receiver Tee Higgins, who collided with Bills safety Damar Hamlin during Monday’s game immediately prior to Hamlin suffering a cardiac arrest, said Thursday the support he’s received from the Hamlin family and the improvement in Hamlin’s status has helped him process the harrowing events from being involved in the play.

“Everybody’s been making me feel whole again,” Higgins said in his first public comments since the incident. “I talked to his mom. Everything’s OK, he’s doing good, so I’m in a good place right now.”

On Thursday, doctors at the University of Cincinnati Medical Center announced Hamlin has had “substantial improvement to his condition over the past 24 hours.”

Higgins has received support from Hamlin’s family, which made a point to publicly push back against negative sentiments directed toward Higgins in the hours and days following the game.

“Just telling me that she’s thinking of me, praying for me and things like that,” Higgins said of his conversation with Hamlin’s mother, Nina. “She’s telling me that he’s OK. Just all the good, positive stuff.”

With a little over six minutes remaining in the first quarter of Monday’s Bills-Bengals game, Higgins caught a pass over the middle from Joe Burrow and raced upfield, running into Hamlin, who tackled him after a gain of 13 yards. Hamlin then collapsed to the ground, sending medical personnel rushing to his aid.

As the seriousness of Hamlin’s condition became apparent, Higgins was forced to grapple with what had happened.

“You know at first, me being a football player, I think that he just flopped, one of our guys bumped him,” Higgins said. “I looked, seen him fall. I looked again, I seen what happened, so I just turned my head, tried not to think about it. I knew it was something crazy, something tragic. Man, it was hard. Obviously, wasn’t in a good place to play for the rest of that game, so I’m kinda glad that we chose not to play.”

Higgins said the days since Monday night have “been hard,” but he intends to play against the Ravens on Sunday.

Many teammates, as well as fellow players around the league, have rallied around Higgins after the frightening events from Monday night. Bills quarterback Josh Allen made a point at the end of Thursday’s news conference to offer support to Higgins, calling out the criticism that has been levied at the third-year receiver.

“I haven’t reached out to Tee. I hope that he got some relief today,” Allen said. “I saw some stuff on Twitter. People should not be attacking him whatsoever and I’m glad that Damar’s family came out and said that and hopefully he found some relief today. Because again, that’s a football play and I hope that he doesn’t hold that upon himself, because I mean there’s nothing else he could’ve done in that situation, so I just wanted to say that, too.”

Said Burrow on Wednesday of his wide receiver: “He’s doing well. He’s pretty shaken up just like all of us. Like I’ve said, never seen anything like that. And unfortunate as it is, that’s part of the game. Something that you hope never happens, but as we saw on Monday night can and will happen.”

Within Thursday’s announcement was a revelation that when Hamlin awoke, the first thing he asked was, “Did we win?” Doctors told Hamlin, “Yes, Damar. You won. You won the game of life.”

“Actually, I had a smile on my face when I heard that, because that’s probably something I would’ve asked as well,” Higgins said. “‘Who won the game?’ But that’s how you know that he was locked in and ready to ball out. But that’s good, knowing that.

“He definitely won the game of life with that, because, man, that was crazy.” 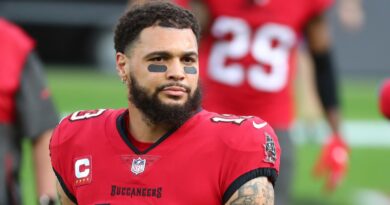