Last week was a big one for waivers, at least for this late in the season. Hopefully you took advantage because the top Week 14 fantasy waiver wire pickups and free agent adds leave a lot to be desired. In fact, several of the best guys are leftover from last week, like Titans RBs Dontrell Hilliard and D’Onta Foreman. Of course, as we’ve seen the past few weeks, more viable pickups will emerge over the next few days. As we look at the landscape on Sunday night, it’s mostly bench WRs (read: free agents), such as Amon-Ra St. Brown, K.J. Osborn, Russell Gage, and DeVante Parker.

Our full free agent list has more potential pickups, like Philadelphia’s handcuff RBs (Jordan Howard, Boston Scott, Kenneth Gainwell), Tevin Coleman, and Taysom Hill, but it’s mostly full of potential Week 14 streamers at QB, WR, TE, and D/ST. At this point in the season, you need to plan ahead for all potential lineup situations, including last-minute pivots and handcuffs at both RB and WR. You can find our streamer suggestions the end of this list.

We would normally say this isn’t the type of week where you want to use a high waiver claim, but if it’s win-or-go-home time for you, then do what you need to do. The Titans RBs could be top pickups, but let’s face it — if they’re still available in your league, chances are you don’t need to use a top waiver claim to get them. The same goes for Coleman or any other RB.

There are enough decent WRs that even if you need one, you don’t necessarily need to use a waiver claim to get a good one, but if there’s a guy you really want, then go get him. The same goes if you really want/need Hill or another QB.

Unless otherwise noted, only players owned in fewer than 50 percent of Yahoo leagues considered.

Dontrell Hilliard and D’Onta Foreman, RBs, Titans. Remember them? Both ran for over 100 yards against the Patriots in Week 12 before being on bye in Week 13. Both are still available in around 60 percent of Yahoo leagues, and with favorable matchups against Jacksonville and Pittsburgh coming up, both need to be owned.

Amon-Ra St. Brown, WR, Lions. St. Brown operated as Jared Goff’s go-to guy in Week 13, catching 10-of-12 targets for 86 yards and a TD against the Vikings. We know St. Brown won’t perform like that every week, but a late-season surge wouldn’t be shocking. Detroit has favorable matchups against Denver in Week 14, Atlanta in Week 16, and Seattle in Week 17, so grab him now as a bench stash for the fantasy playoffs.

K.J. Osborn, WR, Vikings. Osborn made some waves early in the season, but it took an Adam Thielen ankle injury early in Week 13 for him to rise again. Osborn picked up the slack for Thielen, catching four passes (seven targets) for 47 yards and a score against the Lions. With Thielen likely out for Week 14’s Thursday night game against Pittsburgh, Osborn has some WR3/flex potential. He has an even better outlook for Week 15 against Chicago, so if you think you’ll need a receiver then, grab Osborn now.

Russell Gage, WR, Falcons. Gage has continued to step up in the absence of Calvin Ridley (personal), and he turned in his best game yet in Week 13, catching 11-of-12 targets for 130 yards. Gage should continue to operate as Atlanta’s top option, and even though he has a tough matchup against Carolina next week, he has plenty of playoff value with matchups against San Francisco and Detroit in Weeks 15 and 16.

Taysom Hill, QB, Saints. If you actually watched New Orleans’ Thursday night game against Dallas, you’re probably scoffing at this suggestion. However, if you only looked at the fantasy numbers, you’d be excited to pick up a QB who finished with a top-10 point total. That’s exactly what Hill did when he started last year, too, so even with his finger injury, he’s worth adding to your fantasy roster, especially with games against the Jets, Bucs, and Falcons coming up.

For additional waiver/free agent suggestions, including more streaming options at every position, check out our full Week 14 list. 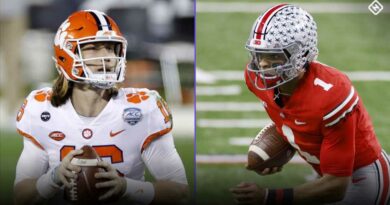 Big Ben 'throwing without pain' for first time in years