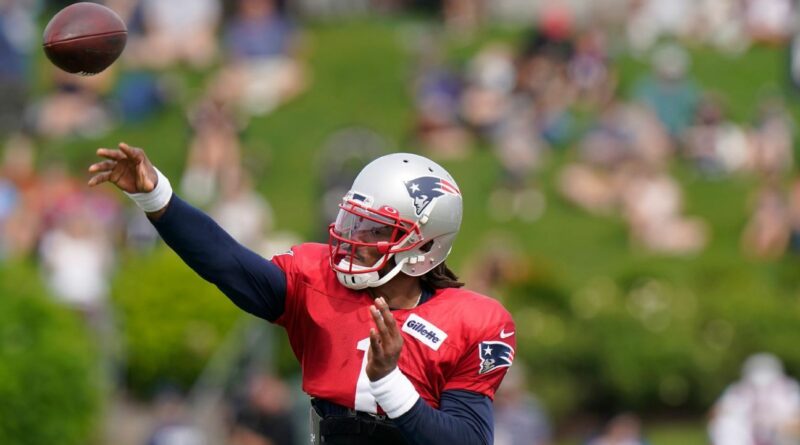 Tuesday’s 2021 NFL training camp practices were highlighted by several teams practicing in pads for the first time and quarterback news.

Cam Newton had a big day for the New England Patriots as he works to cement his role as the starter entering the season, Jacksonville Jaguars rookie Trevor Lawrence bounced back from a rough Monday outing with a strong day, and Las Vegas Raiders quarterback Derek Carr is clicking with 2020 first-round draft pick and wide receiver Henry Ruggs III.

Elsewhere, New York Giants starter Daniel Jones found himself at the bottom of the pile during a practice brawl, Deshaun Watson didn’t practice for the Houston Texans for an undisclosed reason and Dallas Cowboys starter Dak Prescott could resume throwing next week as he works through a latissimus strain in his right shoulder.

Here’s what you need to know and see from camps across the league:

Top NFL news of the day

The Giants’ first day of padded practice ended abruptly Tuesday when coach Joe Judge angrily addressed and punished his players for a teamwide brawl that included starting quarterback Daniel Jones at the bottom of the pile. Judge could be heard delivering an expletive-laden tirade at his team after the scuffle. After ordering the players to run 100-yard wind sprints and to do multiple rounds of pushups, Judge then gave his fiery address before ending the practice.

The All-Pro guard will be out five to 12 weeks with the same foot injury as quarterback Carson Wentz, coach Frank Reich said. Nelson suffered the injury on his right foot during Monday’s practice. Nelson watched practice with a boot on his right foot Tuesday.

Cam Newton had one of his most productive days of training camp as the Patriots wore full pads for the first time. The starting QB was 11-of-17 in competitive 7-on-7 and 11-on-11 drills, with one of his best throws a 50-yard TD to receiver Nelson Agholor. He also ran the read-option, which ultimately set up a TD throw to tight end Hunter Henry, as the defense had to respect the run as Newton rolled out to his right. — Mike Reiss

Trevor Lawrence bounced back nicely from a shaky start on Monday by completing 18 of 27 passes in 7-on-7 and 11-on-11 drills. Lawrence did throw his third interception of camp — linebacker Joe Schobert grabbed it in the middle of the field — but also ripped a nice throw to Marvin Jones Jr. in the seam. Lawrence also converted four first downs in five chances in third-down 11-on-11 work.

“This is where we want him to make those mistakes,” offensive coordinator Darrell Bevell said. “We want him to learn. We want him to grow. We’re going to try to put him in the toughest situations possible and then be able to see how he reacts right there in the moment and see how he’s able to bounce back the next day as well. I like what he did [on Tuesday]. We still had another turnover today, but we’ll continue to work on that.” — Michael DiRocco

The trust level is growing between Derek Carr and receiver Henry Ruggs III. Twice in 11-on-11 drills — with the team wearing helmets and, for the first time in camp, shoulder pads — Carr found Ruggs on deep balls for touchdowns. First, the speedy Ruggs beat cornerback Nate Hobbs and safety Dallin Leavitt to the left pylon, eliciting a “Way to run, baby!” from Carr. Later, Ruggs beat cornerback Trayvon Mullen and safety Johnathan Abram to the same pylon.

“The big thing with Henry is he’s out here, he’s practicing, and he knows the offense,” Raiders coach Jon Gruden said of Ruggs, the No. 12 pick of the 2020 NFL draft and the first receiver selected. “He anticipates what’s going to be called now instead of reacting to what’s called as he’s lining up.” — Paul Gutierrez

The Saints’ defense had its first decisive “win” of camp on the first day pads came on. Quarterbacks Taysom Hill and Jameis Winston were more off-target than they had been in previous days, and rookie QB Ian Book threw the first interception in team drills to linebacker Zack Baun. Veteran cornerback Marshon Lattimore continued his dominant performance in camp. Rookie defensive end Payton Turner, rookie cornerback Paulson Adebo and second-year linebacker Andrew Dowell were among others who had standout performances. — Mike Triplett

The Lions started practicing with pads for the first time, which had first-year coach Dan Campbell like a kid in a candy store. He opened the day by sharing a funny story from his rookie season about his first day in pads, which ended in a brawl. Although he hoped that wouldn’t happen in Detroit, he encouraged that level of intensity. I want to see them go all the way to the point to where it is almost an all-out brawl,” Campbell said. Rookies Amon-Ra St. Brown and Ifeatu Melifonwu got into a scuffle that had to be separated by teammates after a drill, and St. Brown said he enjoyed the physical interaction. — Eric Woodyard

The Chiefs have struggled in recent years to find linebackers who are capable in both running and passing situations, but Willie Gay and Nick Bolton have been encouraging to them in that regard so far in training camp. Gay, a second-round draft pick last year, has broken up a number of passes, and Bolton, a second-round pick this year, had an interception against Patrick Mahomes for the second day in a row on Tuesday, when the Chiefs practiced in pads for the first time.

“They’re making plays,” coach Andy Reid said. “I was curious to see how they would do with pads on with the running game coming at them, and they did a nice job with that. Good instincts. I like what I’ve seen.” — Adam Teicher

Defensive end Calais Campbell certainly flexed his strength in the first full-padded practice of training camp. Getting in the backfield by pressuring inside and on the edge, Campbell beat up a makeshift offensive line that was playing without three starters. He would’ve had a handful of sacks if tackling were allowed.

“He is flashing a lot,” coach John Harbaugh said after practice. “He’s a big, powerful guy.” Campbell is coming off a season in which he only had four sacks, his fewest since his rookie season in 2008. — Jamison Hensley

No pads Tuesday for the Chargers, who jumped the gun and had them on yesterday. Not having them on today is a sort of punishment. But they should have them tomorrow. On the bad-news front, receiver Jalen Guyton spent most of practice in the trainer’s tent and tackle Bryan Bulaga left during the last field sequence. No word from the team yet on either player’s injury or availability. — Shelley Smith

First day in pads — first bigtime highlight from first-round pick Kyle Pitts. As part of an overall productive day, Pitts had the catch of training camp so far, watching a tipped pass float in the air in the end zone and then concentrating enough to come down with it as defenders were draped all over him. It was the high-effort, eye-popping athletic play Pitts made often at Florida and appears to be translating well to the NFL. He’s going to be a big part of the Falcons’ success (or failure) in 2021. — Michael Rothstein

After the illegal hit by J.T. Ibe that resulted in the rookie safety being released from the team and receiver Keith Kirkwood being hospitalized (he was released with a concussion), the Panthers did continue practicing after a lengthy period of eerie silence.

Right tackle Taylor Moton got some snaps at left tackle during the first practice in pads. It’s not a surprise, but it will be if this continues a week or two from now. Coach Matt Rhule is pleased with the play of left tackle Cam Erving, clearly the starter for now. But Rhule is still giving left-side reps to Moton. Some of this is to have Moton ready in case of injury to Erving. Some of this is because the Panthers clearly aren’t sold that Erving will be the player to protect Sam Darnold’s blind side, which is a priority.

“A lot of it depends on how he looks,” Rhule said of Moton on the left side. “If he looks great we’ll give him more reps.” Stay tuned. — David Newton

Best of the rest from around the league 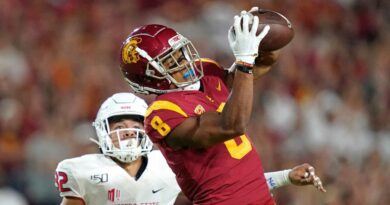