Here we are in Week 9. The first College Football Playoff rankings come out next week, so I’m sure everything will go quietly this weekend.

It has been a week since LSU All-American linebacker Devin White was called for a controversial targeting penalty in the fourth quarter against Mississippi State quarterback Nick Fitzgerald. The Tigers have a bye this week and No. 1 Alabama next week, and the second-half penalty means White, probably the Tigers’ best player, will miss the first half against the hated Crimson Tide. With an extra week to stew on it, they seem to be taking things in stride down in Louisiana.

For instance, the governor, John Bel Edwards, weighed in.

The Ragin’ Cajun, political strategist and commentator James Carville, wrote an op-ed calling it “collusion” between the SEC and Alabama and saying the league “has an opportunity to take a stand for fairness and democracy” by righting this wrong.

A crowdfunding campaign raised enough money to put 13 billboards in Birmingham, Alabama, home of the SEC offices, with even more spotted in Baton Rouge.

And on Saturday, things escalate even further as the campaign takes to the skies, with banners scheduled to fly over the Florida-Georgia game in Jacksonville and another scheduled for LSU-Bama next week.

LSU fans may not win their battle. But at least they’ve found support among American hero Tim Tebow. So there’s that.

Uniform “reveals” for color combinations have become a thing, and now we’re really getting into the holiday spirit with them.

South Carolina created a Halloween-themed trailer — hurdling folks in a cornfield and all — for their all-black unis for Saturday night’s game against Tennessee (7:30 ET, SEC Network).

Syracuse is goin’ all Michael Myers for their game against No. 22 NC State (7, ESPN2).

Missouri is wearing all black against No. 12 Kentucky (4, SEC Network).

And Ohio State has a bye, but they announced an all-black look for Nebraska next weekend.

In Stillwater, Oklahoma State is celebrating the 30th anniversary of Barry Sanders’ monster 1988 season, in which he rushed for 2,850 yards, scored 44 touchdowns, broke 34 NCAA records and won the Heisman.

In addition to wearing throwback uniforms for their game against Texas (including a 30th anniversary patch), Sanders and his offensive line — known as the War Pigs — will be grand marshals of OSU’s homecoming celebration and the Sea of Orange Parade on Saturday morning.

Read more on the wild stories behind Sanders’ insane season.

On the road at Virginia Tech, Georgia Tech started Tobias Oliver, a redshirt freshman, at quarterback. He didn’t complete a single pass, although he only attempted one. Instead, he carried the ball 40 times — mostly simple quarterback sweeps — as the Yellowjackets beat the Hokies 49-28.

“We ran, like, four or five [plays],” Georgia Tech running back Jordan Mason told the Roanoke Times. “They couldn’t stop it. So we didn’t have to bring out as many plays.” 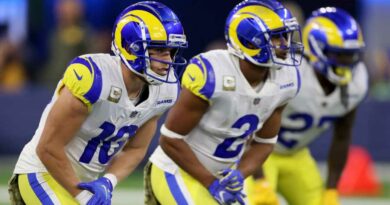