It doesn’t get much bigger than a 1 vs. 3 regular-season showdown. “College GameDay” is in Athens, Georgia, for the titanic SEC matchup between the Tennessee Volunteers and Georgia Bulldogs.

The Vols are ranked atop the first edition of the College Football Playoff rankings, while the Bulldogs sit at No. 3. Georgia remains No. 1 in the AP Top 25 rankings, with Tennessee tied for No. 2 with the Ohio State Buckeyes. According to ESPN Stats & Information research, this is the first AP top-three matchup between SEC East teams since the divisions began in 1992.

SEC history suggests that Tennessee could be the winner. The higher-ranked team has won six of the eight previous meetings between SEC teams that are 8-0 or better when playing.

Elsewhere, the Alabama Crimson Tide, ranked No. 6 in the CFP rankings, face the No. 10 LSU Tigers this week. Saturday could prove to be a de facto divisional championship round in the SEC. None of these teams can clinch a spot in the SEC title game; however, the winner of the Tennessee-Georgia game will have a 99% chance to win the East, and the winner of the Alabama-LSU game will have an 84% chance to win the West, according to ESPN Analytics.

“College GameDay” is at the home of the reigning national champion. Here are the best signs from Saturday: 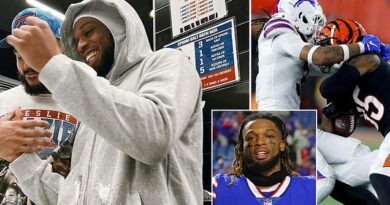 Damar Hamlin supports his Bills teammates from home during playoffs

Kiszla: Is it a curse? Coronavirus, boycott, war and stuff that shatters Olympic dreams every 40 years. – The Denver Post