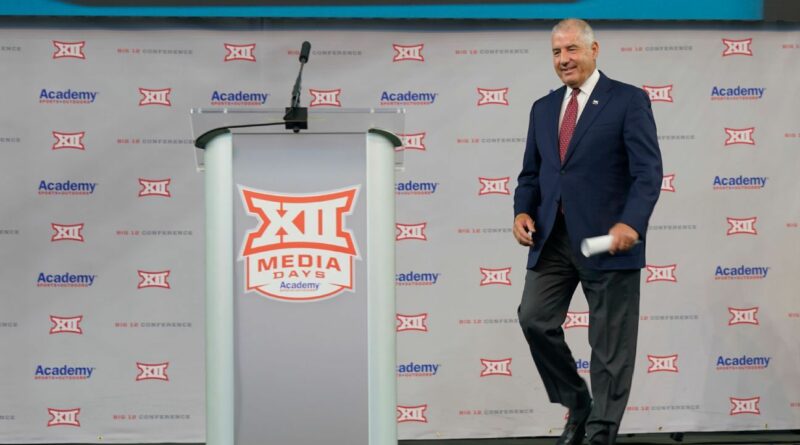 Big 12 commissioner Bob Bowlsby kicked off Big 12 media days on Wednesday with a reminder that college football will still be dealing with the COVID-19 pandemic this fall, and he made a strong push for players to be vaccinated.

Bowlsby was proud that the Big 12 completed 90% of its 2020 schedule but said the biggest lesson was that patience was important and planning too far into the future was futile. He said that while he was “exhausted” from the season, the league will revisit testing protocols this fall.

“I don’t know that I’ve ever introduced a topic that was less warmly received than the revisitation of protocols,” he said. “With the Delta variant, there are good reasons we need to be vigilant. There’s still going to be a fair amount of testing. Yeah, we wish we were done with it. But we’re probably not quite done with it.”

He said the Big 12 cannot mandate that its players be vaccinated, but he strongly supports it. “We are certainly, as we go forward, encouraging student-athletes to get vaccinated. … Frankly, anyone not getting vaccinated is taking unnecessary risk. And that’s not just student-athletes, that’s anyone in our society.”

Bowlsby reminded reporters of the NC State scenario in the College World Series, when the Wolfpack’s season was ended by COVID-19 issues, and said that remains a possibility during football season.

“For a student-athlete, you’re rolling the dice on whether or not you can participate [if you’re not vaccinated],” he said. “You’re going to be in a testing protocol.”

Bowlsby said the league revenue distribution fell because of the pandemic, saying the Big 12 distributed about $35 million per school, about $4.5 million less than might have been expected during a normal season. He said the bigger financial impact will be felt on each campus as a result of a loss of ticket sales.

What channel is Seahawks vs. Giants on today? Time, TV schedule for Week 13 NFL game