After a disappointing blowout loss to Buffalo to end its season, there’s a high likelihood that changes may be afoot in New England. Whether it’s in coaches or roster composition or another facet remains to be seen, but since Tom Brady left, the team is 17-16 and hasn’t won a playoff game in three years.

One constant that will remain, however, is Bill Belichick as the soon-to-be 70-year old confirmed on Monday that he’ll be back on the sideline for 2022 when he spoke to the Greg Hill Show.

IYER: Why Buffalo’s Josh Allen is perfect QB to routinely handle the Patriots

There seemed to be discussions that Belichick was operating on a year-by-year basis, but he quickly dismissed that, saying it was never the case.

“Nobody ever said it was year-to-year or something else,” he said. “I enjoy the job that I have and trying to do everything I can to help the team. That’s what I’ve always done and that’s what I’ll continue to do.”

Belichick did concede there are challenges that come with the job, whether it’s in coaches leaving for greener pastures, players retiring or leaving in free agency and a slew of other things. But it’s also in those challenges where Belichick seems to draw enjoyment from the job.

MORE: By the numbers look at Buffalo’s historic wild-card rout of New England

“For me, I enjoy the job,” Belichick said. “It’s challenging, but I enjoy all aspects of it. Robert and Jonathan [Kraft] have been very supportive and they’ve given me great opportunity to try and do the things we need to do to have a good team. I think we certainly made improvements from where we were last year but we certainly have a way to go as well.”

Part of that growth Belichick alluded to was with the team’s younger players, not just rookie quarterback Mac Jones.

“The coverages, the looks, the passing the game, the defenses — they’re a lot better than they are in college, so it’s just experiencing those things,” he said. “We can talk about them and put diagrams up on the board, but actually being out there dealing with it is a whole different level.” 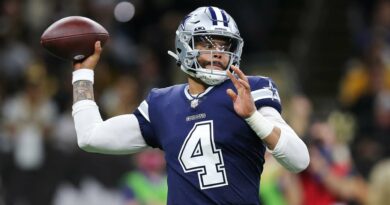 How to fix the Cowboys: 5 steps to end playoff disappointments, Super Bowl drought in 2022

Lamar Jackson: Ravens 'ticked off' after loss to Patriots