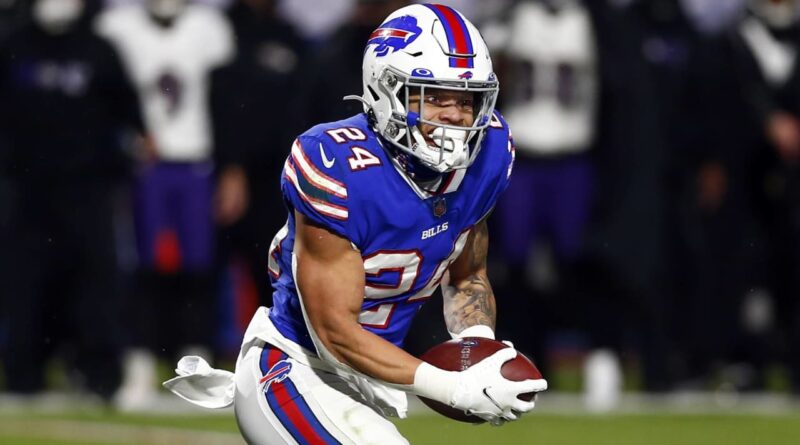 Baltimore was driving, nine yards from tying the game and ready to snap the ball on the 15th play of a 66-yard drive. With less than a minute to go in the third quarter of its first Divisional Round game in a quarter-century, Buffalo was about to lose its seven-point lead over ﻿Lamar Jackson﻿ and the visiting Ravens, one that it had only sustained because ﻿Justin Tucker﻿ had unfathomably missed two field goals from under 50 yards.

Ravens-Bills was primed to go into the final frame deadlocked at 10, but then Jackson dropped back and ﻿Taron Johnson﻿ stepped up.

The Ravens quarterback threw a ball intended for a sitting ﻿Mark Andrews﻿ a yard deep into the end zone, but Jackson never saw Johnson lurking to Andrews’ right, and the reigning MVP’s toss, thrown a bit behind the Ravens TE, fell into Johnson’s arms. The Bills cornerback neglected to kneel and ran Jackson’s pick out of the end zone, then out further, all the while outrunning the speedy QB down the near sideline — with some help from his bodyguard in ﻿Tre'Davious White﻿ — and reaching the opposite end zone.

A 101-yard pick-six to flip the field, flip the scoreboard and, with the Bills’ 17-3 win, flip the script on 27 years of title game-less years in Buffalo.

“Taron Johnson,” Bills quarterback ﻿Josh Allen﻿ remarked after the game, per The Athletic. “That’s a play that people are going to remember for a long time here in Buffalo, potentially a franchise-altering play.”

Forget Buffalo. Johnson’s pick-six was one of the most memorable and unusual defensive touchdowns in NFL playoff history. The score was tied for the longest pick-six in NFL postseason history with Green Bay’s George Teague, who took Detroit’s Erik Kramer 101 yards to the house in a Packers win in the 1993 wild-card round.

“Coach made a good call, a Cover-2 call, and I’m just reading the eyes of the quarterback,” Johnson, a fourth-round pick in his third season, said of the interception, per ESPN. “I have the seam in that coverage, and he took me to the back side, and all I did was cheat. He didn’t see me, and the ball came to me.

“I kind of looked down, but then I looked up, and I saw a whole bunch of green grass to the right side. So I figured if I could race over there — I know Lamar is fast, but if I have lead blockers, I feel like I could take it.”

Adding to the pick-six’s strangeness, it was Jackson’s first career red-zone interception; the Ravens QB had been responsible for 62 total TDs and zero INTs before that play. Most importantly, the field-flipper increased the Bills’ win probability an astounding 30 points from 63 percent to 93 percent. That likelihood bore out.

On the very next drive, Jackson was knocked out of the game with a concussion, and Baltimore never recovered.

The Bills reached their first AFC Championship Game since the 1993 season thanks to a once-in-a-decade defensive play, but also a stunning defensive effort on the whole. On Saturday night, Buffalo became the first team to score more TDs on defense (1) than its opposing team did on offense (0) since the 2005 Patriots.

Up next for Buffalo is either a date with the reigning Super Bowl champs in Kansas City or a showdown in Buffalo with a fellow cursed franchise in the Browns. Whoever is the Bills’ next opponent will have to contend with a rejuvenated team, one that rewrote history in real time and potentially turned around the fortunes of an entire franchise in one play.

“We’re not done yet,” Johnson said last night, per The Athletic. “We’re trying to get to the big show.” 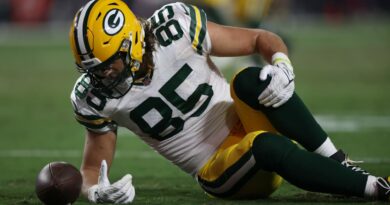