For the first time in 42 years, the No. 32 O.J. Simpson wore in his heyday now belongs to another Buffalo Bills player.

“I thought it was retired,” running back Senorise Perry told The Athletic. "But then I was told it was available. Boom, I took it."

The Bills' No. 32 jersey was never one of their three officially retired numbers, but it was always synonymous with Simpson, who was drafted first overall in the 1969 draft by Buffalo and spent nine years with the franchise. Buffalo has retired Jim Kelly's No. 12, Thurman Thomas' No. 34 and Bruce Smith's No. 78.

Simpson, a Pro Football Hall of Famer and most valuable player in 1973, was acquitted of double murder in 1995 and then found liable in a 1997 civil trial. The 71-year-old was released from prison in 2017 following a 2007 armed robbery incident.

“Whatever (the Bills) do is fine with me,” Simpson told The Athletic. “That’s how I feel. When I played there, I tried to honor the team. Since I left, I always tried to honor the Bills. To be honest, it’s not something I think about. There’s too much else going on in life. …Whatever they decide to do will not change the way I feel about the people of Buffalo and my time spent there."

Perry, who played for the Dolphins last season and was signed as an undrafted free agent by the Bears in 2014, said he understood the history and didn't mean any disrespect to Simpson.

“Of course, he still wants his number retired,” Perry said. “Anybody would want that, no matter what level you played. You can’t take away anything he’s earned on the field. But I hope he sees me as a football player who honors and respects the game. I take pride in being a football player.

“I know the situation. I know that greatness comes with that number, playing in Buffalo. But I’m willing to take anything that comes my way. …With that number on my back, I know I’m doing well for my family.” 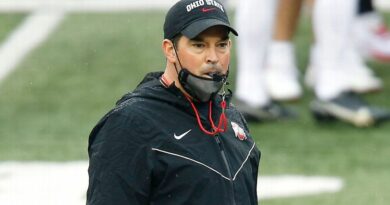 How Flacco, Foles, others rolled big games into big money — and why Hill might be next