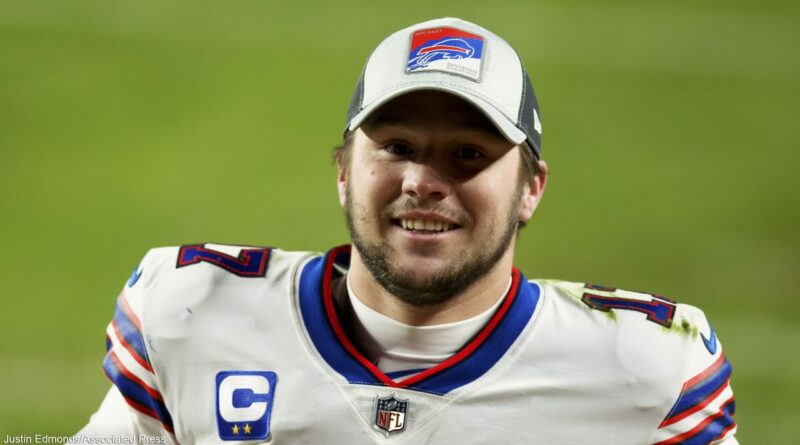 ﻿Josh Allen﻿’s seemingly unprecedented improvement in 2020 put the Buffalo Bills quarterback on the path to a massive payday as he becomes eligible for a new contract extension this offseason.

One of the NFL’s premier young talents, Allen isn’t fretting about the future. The QB joined “10 Questions with Kyle Brandt” and reiterated being patient about a long-term contract.

“When it happens, it happens,” Allen repeated a familiar refrain we’ve heard from both sides this offseason.

Pushed further, Allen admitted that, obviously, getting something done sooner rather than later would be ideal, but he’s not wasting his time campaigning for a new contract.

“There’s a lot of different ways you can go about it,” Allen told Brandt. “Honestly, I love playing football. I want to listen and be engaged in the contract talks. Ultimately that’s why you pay your agents, and that why you hire a guy like (Bills GM) Brandon Beane and (assistant GM) Joe Schoen, and the front office guys and what they do. They’ll iron out the details, and if we can get to something soon, I’d obviously love to be locked down in Buffalo for a very long time. It’s a place that I call home. I love being there. I love the fan base. I love the city. It’s everything that I want, is there. If they called up and wanted to talk tomorrow, I’d be willing, but we’ll see. We’ll cross that bridge when we get there.”

Neither the Bills nor Allen have seemed antsy to get a long-term extension done right now. Usually, these big extensions come for quarterbacks later in the summer, after the front office has taken care of its responsibilities in the draft.

Beane noted earlier this offseason on the Huddle & Flow podcast with NFL Network’s Jim Trotter and Steve Wyche that if an extension didn’t come this year, it could happen next offseason.

Allen deftly declined to comment when asked about Beane’s quote.

“I think Brandon Beane is extremely good at his job, and he gets paid to be the general manager of the Buffalo Bills, and I get paid to be the quarterback,” he said. “Until any of that changes, I’m just gonna be, like I said, the best version of myself, the best quarterback, the best teammate that I can be for the Bills.”

We’ve seen significant long-term extensions work out differently in recent offseasons. The Kansas City Chiefs’ massive deal with ﻿Patrick Mahomes﻿ allowed the club flexibility this offseason. Others like the ﻿Jared Goff﻿ and ﻿Carson Wentz﻿ contracts became onerous and led to trades. Then there is the ﻿Dak Prescott﻿ situation, in which back-to-back franchise tags ended up with a gigantic new contract for the Cowboys quarterback.

Brandt asked Allen to respond to the word “franchise tag.”

“I don’t think it’s great for the team, nor the player,” the QB expounded. “Again, I need to do more research on it, but if you look at the guys that’ve been tags in the past couple years, as far as the quarterback position goes, it was Dak, and ﻿Kirk Cousins﻿. And at the end of the day, you could make the case that they should’ve just done the deal the year prior, or a couple years prior. So it is what it is. At the end of the day, whatever happens, happens. It’s not gonna deter me from trying to be the best quarterback for the Bills.”

Beane himself has noted that the Bills would like to avoid the franchise tag. With Allen under contract two more years before that tender comes into play, Buffalo has time — the Bills will presumably exercise the QB’s fifth-year option before next month’s deadline.

Without a deadline to spur action, and with both the team and player saying all the right things at this stage, there is no hurry to get a new deal done at this point in the NFL calendar. Down the line, that earnestness might change from the QB and team.

What you need to know about the approved NFL CBA: Biggest changes and what’s new