ORCHARD PARK, N.Y. — The Buffalo Bills may have found their backup quarterback of the future in Georgia quarterback Jake Fromm, whom the team selected with the 167th overall pick of the NFL draft Saturday.

Fromm is the first quarterback Buffalo has drafted since taking current starter Josh Allen in the first round in 2018. Fromm said he already received a congratulatory text from Allen, with whom he shares an agent.

The former Bulldog was a three-year starter at the collegiate level, leading Georgia to the College Football Playoff national championship game during the 2017 season. In the process, he held off a pair of five-star prospects in Justin Fields and Jacob Eason, who was drafted by the Indianapolis Colts in the fourth round earlier in the day.

In a text to ESPN’s Chris Mortensen, Bills general manager Brandon Beane said he “wasn’t planning on drafting a quarterback today,” but Fromm was “too good to pass up” at that spot.

Fromm completed 63% of his passes for 8,236 yards and 78 touchdowns against just 18 interceptions, but wasn’t perceived to have the same upside as some of his peers in his draft class. However, with current backup Matt Barkley in the final year of his contract, Buffalo made the decision to add Barkley’s successor. 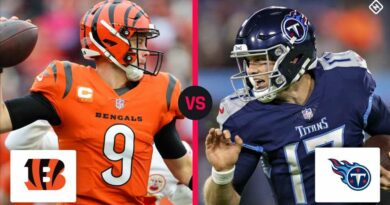 Joe Mixon erupts for the Bengals and JJ Watt is sick of losing: 12 things from NFL Sunday

Ben Roethlisberger vows to return better than ever, adding: ‘I’m not overweight”