Looking to spark an injury-depleted offense and help his struggling quarterback find a rhythm, Nathaniel Hackett is making the biggest change of his young tenure as Broncos head coach:

Hackett is turning over play-calling duties to quarterbacks coach Klint Kubiak, who will send in the calls to Russell Wilson starting with Sunday’s home game against the Raiders, per sources.

Hackett informed players of his decision during Saturday night’s team meeting, telling them in an impassioned and enthusiastic speech that he’s willing do whatever it takes to help the team get better after a disappointing 3-6 start.

Sources say Hackett chose the 35-year-old Kubiak because he has called plays before — the Vikings had one of the NFL’s most explosive offenses with Kubiak as offensive coordinator in 2021 — and will give Wilson a different view from Kubiak’s seat up in the booth. It’ll remain a collaborative process, with Hackett and offensive coordinator Justin Outten also heavily involved in the game plan and on the headset during the game, while Kubiak calls the plays and becomes the voice in the ear of Wilson, with whom he has forged a close relationship.

The son of former Broncos QB and Super Bowl-winning head coach Gary Kubiak, Klint Kubiak radioed in plays all week during practice. But Hackett only told a few people in the building, including Wilson and general manager George Paton, about his decision prior to Saturday’s team meeting.

With Kubiak handling the radio in practice this week, Hackett was spotted bouncing around the field and working with different position groups — the type of hands-on coaching he loves. And not calling plays in the game will allow the Broncos coach to focus more on game management and all three phases both during the week and on the sideline.

It’s not an unprecedented move for a first-time head coach in the NFL. Just last year, Eagles coach Nick Sirianni turned over play-calling duties to offensive coordinator Shane Steichen around midseason, and Philadelphia’s offense took off after the change. Giants coach Brian Daboll, a successful play-calling offensive coordinator in Buffalo, tabbed Mike Kafka to call the plays during his rookie season in New York.

It’s a bold move by Hackett, the former Bills, Jaguars and Packers offensive coordinator who has been under fire throughout his first season as head coach in Denver. The Broncos have the NFL’s top-ranked scoring defense entering Week 11, while the offense ranks 32nd in scoring. Wilson — acquired in a blockbuster trade with Seattle and signed to a $245 million contract extension this offseason — is completing a career-low 57.4% of his passes with an 81.4 passer rating, just seven touchdown passes and five interceptions.

The Broncos are currently tied with an NFL-high 15 players on injured reserve, and the slew of injuries haven’t helped Wilson and the offense establish rhythm. They lost No. 3 receiver Tim Patrick to a torn ACL early in training camp. Running back Javonte Williams (torn ACL) and left tackle Garett Bolles (broken leg) have also suffered season-ending injuries. Wilson has played through multiple injuries himself, including a latissimus dorsi strain and a partially torn hamstring. Several other offensive linemen have also missed time. And the Broncos will be down two more receivers Sunday, with Jerry Jeudy (ankle) and KJ Hamler (hamstring) ruled out with injuries and rookies set to play in their place alongside Courtland Sutton.

The Broncos have still been in every game; their six losses have come by an average of five points and they have the third-most one-possession losses in the NFL (five).

The hope is the play-calling change translates into more points, and wins, starting Sunday in Denver. 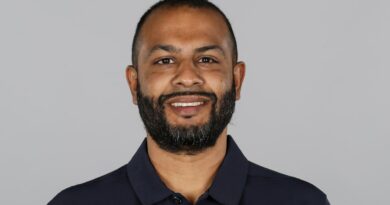 Time to panic?! Broncos, Rams, Packers among NFL teams under pressure after slow start to 2022 season