The Broncos are gearing up for a quarterback competition this offseason after swapping a sixth-round pick for Teddy Bridgewater ahead of the 2021 NFL Draft. The veteran will push third-year pro Drew Lock for the starting job.

Lock appears to have gotten a key endorsement early in the process from Broncos receiver Courtland Sutton.

In an interview with Ryan Edwards and Benjamin Allbright on the team’s flagship radio station, KOA in Denver, Sutton said he “saw a lot of promise” from Lock down the stretch last season while watching from the sideline. He also said he has seen Lock put in the work this offseason to continue improving.

“He’s been up here pretty much every day since the season ended. I get to see him pretty much every day. I talked to the dude and his mind is on a different level when it comes to the game right now. He’s thinking about things that sports analysts would say, ‘You want to hear that from a vet at QB or a guy who has won Super Bowls.’

“You can tell that he’s understanding the game even more. I think a lot of people slept on the patience part of it. He’s so close. I firmly believe he’s needed the reps and needs the reps. Being able to go back and do self-evaluation, I think he understands what he needs to work on and he’s been working his butt off all offseason. And talking to him, he’s excited for the opportunity and I know we’re all excited for him.”

That certainly seems to bode well for Lock. Sutton is the team’s No. 1 receiver even though he missed the 2021 season after suffering a torn ACL, so his opinion may have value.

Of course, Lock still has to prove during camp that he’d be better than Bridgewater. But if he’s putting in the work, then that may give him a leg up because he has experience in the Broncos’ offense.

Lock did perform well in the final four weeks last season, completing 61.2 percent of his passes and averaging 253.8 passing yards per game with seven total touchdowns and two interceptions.

That said, it is worth mentioning that his offseason efforts could be in vain if the Broncos pursue a trade for the Packers’ Aaron Rodgers. There have been rumors about Rodgers’ possible availability and Denver has been mentioned as a potential landing spot. 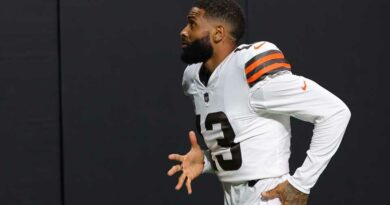 Stefanski: Hurt Baker Mayfield 'was cleared', 'fought his butt off' for teammates