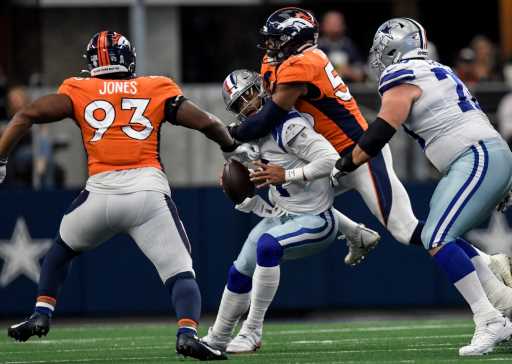 Game balls, quotable and a look ahead following the Broncos’ 30-16 win over the Cowboys in Week 9 to improve to 5-4.

The rookie running back broke out with his first-100 yard game in an overall dominant showing by the Broncos’ rushing attack. Along with Melvin Gordon’s 21 carries for 80 yards and a touchdown, Williams paced the Broncos with 111 yards on 17 carries. That included a 30-yard bulldozing to set up a field goal early in the fourth quarter, and a 10-yard first down run to set up another McManus try later in the quarter.

Going against a Cowboys offense that ranked first in average yards (454.9) and third in average points (32.1), the Denver defense stood tall all day. That included four fourth-down stops as the Broncos held Dallas to 290 total yards, most of which was accumulated on the Cowboys’ two touchdown drives in garbage time. Meanwhile Jonathon Cooper, Von Miller’s replacement, racked up two sacks.

Patrick led Denver with 85 receiving yards on four catches, and had a 44-yard touchdown catch that broke the game open. He averaged 21.3 yards per catch, and in addition to the TD catch, his clutch receptions moved the sticks in three different third-and-long situations. Patrick (34 catches for 509 yards and four TDs in 2021) will be an unrestricted free agent this offseason and is in line for a big payday.

Vic Fangio on the big win: “‘How ’bout them Broncos’, as Jimmy Johnson used to say?”

Fangio on the Broncos’ defense: “They had the right mindset, they bought into what we had to do to have a chance to slow them down, and we did more than slow them down… For 56 minutes, it was a goose egg (on the scoreboard).”

QB Teddy Bridgewater on the upset win: “It was a challenge that guys were ready for… Guys practiced with a sense of urgency, guys went into meeting rooms with laser-focus, guys were locked in on the game plan.”

Center Lloyd Cushenberry on the season-high 190 rushing yards: ““We knew we were due for one of these days, and we were waiting on it.”

About the Eagles: The Jalen Hurts Era hasn’t arrived in Philly without growing pains. After a convincing win over the Falcons in the season opener, the Eagles have dropped six of eight and three of their last four. They have a weak run defense. In Sunday’s loss to the Chargers, a late Hurts TD pass to DeVonta Smith tied the game, but Philly lost on a last-second field goal.

Source: Suh to get $9.25 million deal from Bucs