When Broncos inside linebacker Jonas Griffith sustained a dislocated left elbow on the second play of the Aug. 13 preseason game against Dallas, his estimated return-to-play was 4-6 weeks.

But when the Broncos face Seattle on Sept. 12, Griffith’s fast healing could help him start alongside Josey Jewell.

“I was kind of disappointed because I wanted to practice this week,” Griffith said Thursday. “But I’m just taking it day-by-day and it will be cool to get out there next week.”

Griffith did side-field work during the portion of practice open to the media. When he returns to team work, he will wear the same kind of large brace that runs the length of his arm that left tackle Garett Bolles has worn for years.

How has Griffith been able to get ready?

“Just by taking my recovery seriously and being on top of it even when I’m home; the recovery doesn’t stop when you leave (the facility),” he said.

“I’ll have to ramp up (the reps) for sure,” said McManus, citing how Martin and Waitman divided the holding duties in the preseason.

One other change for McManus is special teams coordinator Dwayne Stukes wanting the field-goal unit to huddle on the field. From 2018-21, coordinator Tom McMahon had the unit gather on the sideline and run directly to their position.

“It’s a different timing getting on the field and it’s a lot longer process,” McManus said. “There’s no specific goal for (breaking the huddle) but if people are celebrating the touchdown, we try to get them to pump the (play) clock up.”

Meinerz wanted to play. Right guard Quinn Meinerz played the first series of the Broncos’ preseason loss at Buffalo on Aug. 20 and it was his choice.

“It was really useful for me to have that opportunity,” he said. “It boosted my confidence to take some pass sets because I’ve been working really hard on my pass protection game. To be able to go out there and get some passes, get some run-game (blocks) and play-action (calls), it was kind of a test. You get a taste of what we’re going to do come (the regular season).”

Okwuegbunam said he was held out of last Saturday’s preseason finale against Minnesota because of his injury, but could have played if it was a regular season game.

Wattenberg played through his injury after stepping on the foot of a Dallas defender.

Briefly. The Broncos have 14 of their 16 practice squad spots filled after signing former CU offensive lineman William Sherman. A sixth-round pick last year by New England, Sherman played one game for the Patriots and was cut Tuesday after playing left guard, right guard and right tackle in the preseason. “Glad to be back (in Colorado) for sure,” he said. “I’m definitely going to have to check out the (TCU-CU) game (Friday). … Wattenberg on making the team: “I’m just so excited and so blessed this organization believed in me and it’s a great accomplishment.” 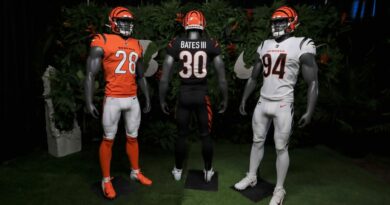