Already without starting cornerback Ronald Darby and receiver Jerry Jeudy for Sunday’s game at Jacksonville, Broncos coach Vic Fangio said right guard Graham Glasgow is “iffy” to be available after experiencing an irregular heartbeat late in the win over the New York Giants.

“He’s doing a lot of tests and we’ll see what those bring back,” Fangio said before practice Wednesday.

If Glasgow, who was present for practice as an observer, is inactive, Fangio said Netane Muti will start.

Jeudy sustained his right high ankle sprain in the third quarter last Sunday and is out 4-6 weeks.

Fangio said Darby “kind of had some tightness of late so I’m not exactly sure when it happened,” and an MRI showed “a little bit of a tear.” He is out a minimum of three games.

Surtain steps in. Fangio said rookie Pat Surtain II will slide into Darby’s role at right cornerback and Bryce Callahan will remain the nickel back covering the slot receiver.

“It’s a new opportunity for me to step in and fill a role so I’m going to be ready,” Surtain said.

Surtain played 16 of 61 snaps against the Giants and was responsible for receiver Sterling Shepard’s 37-yard touchdown in the first half.

“I could have had tighter coverage,” Surtain said. “I should have known that route was coming.”

Footnotes. According to the NFL’s Next Gen Stats, running back Melvin Gordon reached a speed of 21.52 mph, tops in the league last week and the only player to exceed 21 mph. … Receiver Rico Gafford and cornerback Rojesterman Farris practiced after signing with the practice squad. Farris was in camp with the Broncos but was among the first five roster cuts.

What channel is Steelers vs. Bengals on today? Schedule, time for ‘Monday Night Football’ game 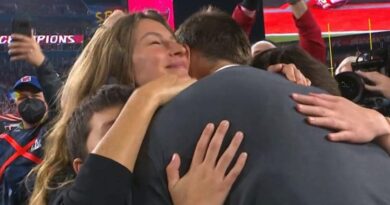 Mind-boggling net worth of power couple