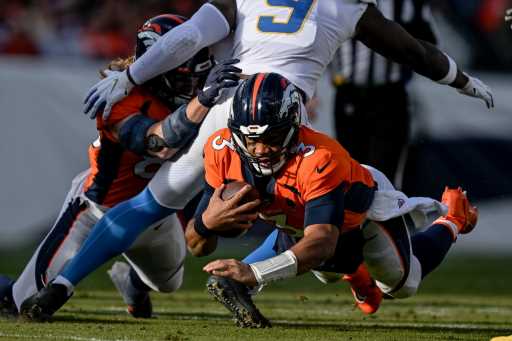 The Broncos emerged from Week 3 at 2-1 and headed into what looked like a manageable stretch of the schedule with some trepidation but also high hopes.

The defense? Legit. The offense? Concerning, but they’d put it together, right?

Now the Broncos are again looking for a new head coach and again faced with questions about how to jumpstart an offense that in 2022 finished last in the NFL in scoring at 16.9 points per game.

“It’s a resilient team and a team that’s hungry to win,” wide receiver Courtland Sutton said of the future after Denver’s season-closing 31-28 win over the Los Angeles Chargers. “Willing to come in and do whatever we have to do to be able to get to that. Practice, meetings, whatever it may be, they’re going to get everybody’s best.”

Unlike a year ago, the Broncos are moving forward with a quarterback in place who is under contract through 2028 and whose salary cap number is only going up from a workable $22 million in 2023.

General manager George Paton and company have decisions to make on 17 free agents and several cut/restructure/trade candidates. They are again working without premium draft capital — they acquired San Francisco’s first-round pick from Miami in exchange for Bradley Chubb, but the pick will be late in the first round — and will likely end up with a useful amount of cap room to work with, though not anywhere near the top of the league.

To both look back on 2022 and look ahead to 2023, here’s a positional breakdown of where the Broncos’ roster stands and perhaps where it’s headed.

Analysis: The Broncos finally landed their long-term answer at quarterback and Wilson turned in the worst year of his decade-plus in the NFL. Silver lining? He looked better down the stretch (outside of a terrible game on Christmas Day) and accounted for 10 touchdowns over his final four games. If he plays like that or better in 2023, the Broncos will be just fine. But that’s still an “if” and the next head coach will have to have a plan for him. .. How does Denver feel about Rypien as the No. 2 going forward? He’s had moments, but also owns a 6.2% interception rate on 130 career attempts (Wilson’s is 1.9%). … The Broncos liked Guarantano enough to sign him to the active roster and keep him from going back to the Arizona Cardinals late in the year. … Paton should follow the Ron Wolf quarterback approach and draft one QB each year, even if it’s a late-round flier.

Analysis: In a wide-ranging race, the RBs win the 2022 award for most turnstile-esque position on a Broncos roster littered with injuries. Williams’ season-ending knee injury in Week 4 stunted Denver’s offense and Melvin Gordon wasn’t up to the task of taking the lead role (or protecting the ball). … What a revelation Latavius Murray was, though. From the time the Broncos cut Gordon and started Murray, he averaged 5.1 per carry. Bring him back in 2023. … Edmonds is a restructure candidate and perhaps can give the Broncos some burst. With the nature of Williams’ injury, finding three others (Murray, Edmonds, draft pick, perhaps?) to have ready to go in September is probably the safe move.

Analysis: The good? Jeudy emerged over the second half of the season into Denver’s potential answer as a No. 1 receiver. He played his final eight games at a nearly 1,450-yard pace and caught 79% of balls thrown his way (47.2% his first six games). Jeudy destroys man coverage and, if he masters zone defenses, too, can be a premier player. His fifth-year option for 2024 will check in about $12.8 million and looks like a much better bet to be exercised than it did four months ago. … Losing Patrick on Aug. 2 might have been the biggest single injury loss of the year. … Sutton started fast but then struggled to find consistent rhythm. … Hamler faces a critical 2023 after another injury plagued season. Everybody in this group is under contract for next season, so will Paton run it back or shuffle the deck?

Analysis: The Broncos appeared to find a player in Dulcich, the third-round pick, though he missed seven games due to hamstring injuries. His blocking improved as the season went along and he has a chance to be special. … What to make of Albert O? His role disappeared under Hackett, but Denver found no suitors for him at the trade deadline. Is he part of the future or perhaps draft weekend trade fodder? Any or all of the three free agents could return — Beck and Tomlinson play particular roles — but among the deciding factors will be what style of offense the next coaching staff plans to deploy.

Analysis: This group is in need of something, whether it’s a re-tool or a re-build. The run game came along as the season progressed, but the group struggled to protect Wilson — certainly, not all of his 55 sacks or Denver’s 63 total are on the offensive line — and there are more questions than answers. Bolles enters a turning-point year coming off a leg fracture that ended his season in Week 4. Cutting him would save $10 million on the cap but also come with $8 million in dead money. And who takes his spot? Risner is a free agent who sounded late in the year like someone wishing the Broncos valued him as a player worth paying rather than a guy expecting to get paid by his hometown team. Cushenberry was inconsistent before a groin injury cost him the final nine games and Glasgow played steady at center but is also a cut/restructure candidate. It would be a shock if he played with his current $14 million cap hit in 2023. Denver could save $11 million by cutting him, but a restructure could also be in play. … Compton and Turner battled injury as free-agent additions… Fleming could return as a depth piece/swing tackle. … Denver hasn’t drafted a tackle since Bolles in 2017. They’ve only got six picks currently, but need to find offensive line help in there somewhere.

Analysis: Dre’Mont Jones is the biggest question and will be the most expensive of Denver’s free agent crop. Paton called him a “core player,” but does he want to pay Jones top-shelf money? A franchise tag could be in play, too. … D.J. Jones and DeShawn Williams were savvy signings and Mike Purcell turned in a solid season on the interior. … Purcell could be a cut/restructure candidate. … Williams had the best year of his career, but will he find a multi-year contract at his age? … The return of one or both depend on where Dre’Mont Jones ends up, but the Broncos are also high on their two Day 3 draft picks from 2022 — Henningsen and Uwazurike. They look like solid draft finds.

Analysis: Maybe the most pleasant surprise on the Broncos roster was the level of play between Jewell and Singleton along with Jonas Griffith before a broken foot ended his season. … Now, does Denver want to pay Singleton? They’d love to have him back, of course, but at what price tag? North, perhaps, of Jewell’s two-year, $11 million deal from last year? Singleton does valuable work on special teams, as well, but the Broncos are high on Griffith. … Jewell had a terrific season (128 tackles, 7 TFLs, two INTs) when healthy and played every snap the final 10 games after missing four of the first seven with calf and knee injuries.

Analysis: This group started the season on fire and then got whittled by injury and trade. Bradley Chubb was shipped to Miami after eight games and finished second on the team in pressures (16) and sacks (5.5). … Gregory made just two appearances (34 snaps total) the final 13 games of the season, while Baron Browning emerged as a promising edge man who still needs to refine his game. … Nik Bonitto had an up-and-down rookie year and must not only put on weight but show he can be a consistent pro. … Martin and Cooper are nice role players, but Denver needs more edge depth a year after feeling like it had an enviable combination of quality and quantity.

Analysis: A position group that looks to be in good hands well into the future. Surtain is perhaps the best in the business already in his second year, and Mathis put forth a promising rookie campaign after he was thrust into starting duty by Darby’s season-ending knee injury. … Surtain’s eventual fifth-year option for 2025 (exercised after next year) is a no-brainer, but he may never actually see it because he’ll be eligible for a massive extension beginning a year from now. … Darby carries a $13 million cap hit and is a cut/restructure candidate. Cutting him would save the Broncos $10 million, but he played well before his injury. … Williams, the nickel, is one of the most underrated players on the team and had a productive season despite various ailments. … McMillian played well in Week 18, his NFL debut. … Surtain and Mathis are an exciting duo, but teams are always looking for secondary help and it wouldn’t be a surprise if Denver looked to the draft for more depth.

Analysis: Simmons continues to be one of the best in the NFL. He finished tied for the league lead in interceptions (six) despite missing five games due to quad and knee injuries and he forced three fumbles and recovered one, too. … Jackson’s been in Denver on consecutive one-year deals now. Is this the year they go their separate ways? The 13-year vet misses some tackles, but he’s a leader and has synergy with Simmons. … Sterns looked ready to blossom playing in place of Simmons early in the year, but missed the final 12 games with a hip injury. … Locke is trusty on special teams and in certain packages, while Turner-Yell must take a big step as a second-year pro. … Another area the Broncos could stand to address in the draft.

Analysis: Is there anybody in this group that will avoid competing for a job in 2023? McManus was asked to kick a lot of long field goals in 2022 (8 of 13 from 50-plus yards) but also missed three times from inside 40 yards (tied for most in NFL) and missed two extra points. His eight total field goal misses (28 of 36) also tied for the most in the league and his make percentage (77.8%) is No. 24 among 27 kickers who attempted 25 or more field goals. … Waitman had an inconsistent year as a first-time, full-time punter. His net punting average of 41.6 was 15th in the NFL and both his gross (46.6) and net checked in a few spots behind the guy Denver cut to keep him, Sam Martin. … The Broncos’ injury bug didn’t even spare the long-snappers. Both did stints on IR and either — or somebody else — could be Denver’s guy in 2023.

Want more Broncos news? Sign up for the Broncos Insider to get all our NFL analysis. 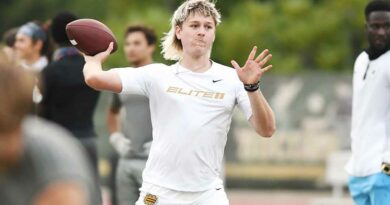 Who is Quinn Ewers? Five-star QB could change NIL, Ohio State and more with decision