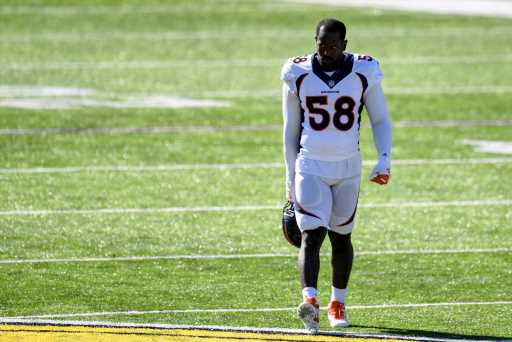 Days away from returning to a regular-season NFL game for the first time since 2019, Von Miller admits “it’s a different Von” entering the outside linebacker’s 11th season.

The difference is a more finessed approach after Miller’s uber-intense offseason heading into 2020 turned into a season-ending ankle injury on Sept. 8, just before the Broncos’ season opener.

“Last year, I put the pedal to the metal and just grinded, and used so many different things for fuel,” Miller said. “I don’t think it was healthy for me. I grinded, I had two-a-days, I had three-a-days, I hit the weight room. If I wasn’t in the weight room, I was on the track, then I’d go do football drills. I wouldn’t say I wore myself down into the ground, but I kind of put a lot of wear-and-tear on my body.

“Then when it was time to go for the season, I had a freak season-ending injury. So I took some of the positives I had from last season, like my work ethic and my mindset, and I applied them to this year. But I took a step back from grinding so hard and I put more of an emphasis on rehab, working on the little muscles, going back to the drawing board.”

Miller hopes the result will be a return to double-digit sack totals as the veteran looks to earn another contract in Denver (he’s said during training camp he wants to be a career Bronco), pad his Hall of Fame resume and help the team get back into contention.

The 32-year-old’s Week 1 test is a matchup against Giants right tackle Nate Solder, who like Miller was also drafted in the first round in 2011. Miller said he’s “100% ready” for a full workload, especially considering Bradley Chubb might not play (or might be limited) with an ankle injury.

Solder’s return. After opting out of the 2020 season over COVID-19 concerns for himself and his family, the Buena Vista and CU product is back on the field.

The 33-year-old beat out second-year pro Matt Peart for the Giants’ starting right tackle job. Solder, a career left tackle who started all 16 games at the position for New York in 2018 and 2019, has not played right tackle since his rookie season with the Patriots in 2011.

But Giants coach Joe Judge is confident Solder’s versatility has him prepared for Sunday’s game at MetLife Stadium. Solder’s primary task will be keeping Miller from getting to quarterback Daniel Jones.

“(Solder) is a guy that moved into tackle through college, and early in his career he played the jumbo tight end,” Judge said. “Nate’s played left and right (tackle) this preseason and he’s done a good job. Obviously he missed some time from last year but he came back and worked very hard this offseason, and he jumped right back into it. I love the spirit and the leadership he brings to this team.”

Sunday will be Solder’s ninth time playing against the Broncos, which includes two playoff games during his time with New England.