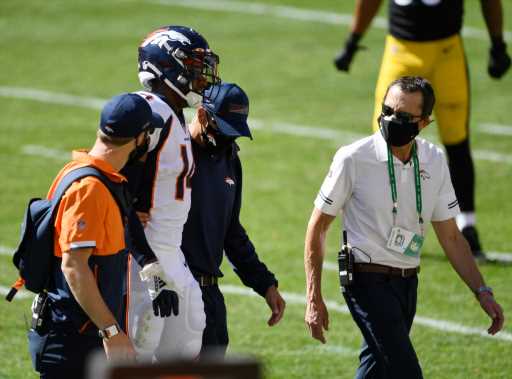 The latest step in Broncos receiver Courtland Sutton’s return from a torn right ACL: On the practice field with his teammates.

Wearing a brace on the knee he injured last September in Pittsburgh, Sutton isn’t full-go, but is trending that way for the start of training camp and definitely the Sept. 12 opener at the New York Giants.

“For myself, I’m grateful for the chance to be able to go back out there,” Sutton said during a video conference Tuesday. “I heard all the stories about how ACLs used to be career-ending type of injuries.

“With technology and getting the surgery and seeing the progress day-to-day and month-to-month and being able to be on the grass doing individuals with the guys, being able to run routes with the guys and just talking to them and coaching them up … it’s been so much fun.”

Coach Vic Fangio said the Broncos are “kind of easing,” Sutton into the flow of practice.

“His rehab has been fantastic thus far,” Fangio said. “He’s had a great attitude. He’s had a great effect in the training room with the other guys that are rehabbing. He’s been infectious that way. Courtland is a stud and it won’t be long before he’s out there.”

Sutton made the Pro Bowl after the 2019 season when he led the Broncos with 72 catches for 1,112 yards and six touchdowns. But then a shoulder injury in practice cost him the ’20 opener against Tennessee and his season ended after only 20 snaps of the Steelers game in Week 2.

“I don’t see myself coming back and playing anything under the standard I’ve set for myself already,” he said. “The way I’ve been attacking rehab is to be able to come back and not just be where I was when I got hurt, but go above and beyond. I know it’s there.”

Simmons on NFLPA. Broncos safety Justin Simmons was one of the team’s prominent players who supported the union-sponsored statement April 13 saying it “makes no sense” to be present for voluntary on-field workouts.

The players’ statement called COVID-19 a “serious threat” to the Denver area and “quality of play across the NFL was better than ever by almost every measure.”

“No regret,” Simmons said. “I think the whole point of this was players knowing it’s their right to exercise (to not be present for voluntary workouts). I said last year there is some value in OTAs. There are different aspects — Phase 1 is lifting and working out and guys are comfortable doing that on their own. Phase 2 is the same thing with a little bit of individual drills; at that point, some guys still like doing individual drills with guys they’re comfortable with.

“I find a lot of value in Phase 3 (OTAs) because it’s football.”

Fangio said Monday he changed the format of OTAs to eliminate 11-on-11 work for at least the first six practices, which can be viewed as a compromise.

Simmons added: “We realize what our record has been the past couple years and guys want to come in and work, but how do we work a little bit smarter with COVID … and (working at) times that is CBA-approved.”

Jackson promoted. The Broncos announced that Ray Jackson has been promoted to vice president of player development.

An alum of Montbello High in Denver, Jackson joined the Broncos in 2015 as director of player development. He previously spent three years with Cleveland and a decade with Pittsburgh in player development capacities.

Jackson is responsible for the Broncos’ off-the-field training and education through club and NFL-supported initiatives.

Offensive Player Rankings, Week 17: Five QBs who could save careers — and one who can repair legacy