ENGLEWOOD, Colo. – Demaryius Thomas is a smart guy as well as one of the all-time best receivers in Broncos’ history.

If there are enough reports out there stating he’s on the trading block, then he can deduce the possibility he may not be wearing the Broncos’ No. 88 much longer.

The positive way to look at a trade is another team would be interested.

“I didn’t know that (other teams are interested) but that’s a good thing if somebody is interested because then I can still play ball,’’ Thomas said with a soft wrap around his jammed left wrist at his locker Monday. “I still got a chance, if I get traded. Of course, I want to be here, but I’ve been hearing it the whole season now, so I feel like somewhat it is true, my time here is coming up. But I don’t know.’’

Thomas, the Broncos’ player with the most team seniority as he was the team’s first-round draft pick in 2010, is second to Rod Smith on the team’s all-time list in receiving yards (9,025) and touchdown receptions (60) and is third to Smith and Shannon Sharpe with 662 receptions. Thomas has 33 catches for 372 yards and three touchdowns through seven games this year.

He has $5 million remaining on his $8.5 million salary this year.

He is on the block for two reasons. One, the Broncos have a quality rookie receiver behind him in Courtland Sutton. Two, because it doesn’t appear the team will bring him back next year and with a non-guaranteed $14 million salary in 2019 remaining on his deal, the Broncos won’t be able to get a compensatory pick for him when he hits free agency and signs with another club.

So, the only time to get a draft pick for Thomas, who turns 31 on Christmas Day, is between now and the next Tuesday’s trade deadline. He is aware of reports he’s available for trade.

“Yeah, I’ve seen a couple of ‘em,’’ he said. “It’s football, man, it’s business. That’s what happens. It’s happened before. I never think it will happen to me but I’m like everybody else. It happens once you get older.’’

Seeking to trade Thomas, though, and executing it are not necessarily the same. While the Raiders were able to trade receiver Amari Cooper to the Dallas Cowboys in exchange for a first-round draft pick, he's 6 1/2 years younger than Thomas.

“It’s rumors, it’s gossip, it doesn’t matter to our football team, really,'' said Broncos head coach Vance Joseph. "Our only concern is the Chiefs and that’s on Sunday. This time of the year, I watch the games on Sunday, obviously. There’s a lot of rumors out there, a lot of gossip and a lot of content for different shows. Until those things happen, we can’t address them or worry about them.”

Joseph no doubt realizes trading away Thomas is not good timing because No. 4 receiver, rookie DaeSean Hamilton, suffered a second-degree MCL strain Thursday against Arizona. While Hamilton is considered day-to-day, it would not be a surprise if such an injury keeps him until after the November 11 bye week. The Broncos are 3-4 and still have Cleveland, San Francisco and Oakland left on their schedule. They're not dead from the playoff race.

Still, if Thomas is traded, it probably wouldn’t happen until after he and the Broncos play the Kansas City Chiefs on Sunday at Arrowhead Stadium. How will he keep focused between now and then?

KUSA is a TEGNA station.

Welcome to Super Bowl week! Why Miami is the perfect host for Super Bowl LIV 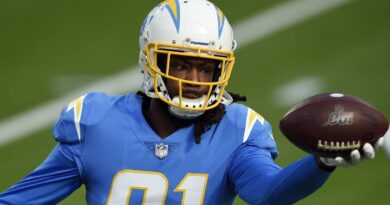