The Denver Broncos kick off voluntary minicamp on Monday, which will allow Russell Wilson and his new batch of receivers to build their chemistry.

After a decade in Seattle, Wilson must quickly get on the same page with his pass-catchers. Building that rapport is vital given the quarterback’s proclivity for off-scheduled plays.

While he’s still rehabbing from an ACL tear, Broncos wideout K.J. Hamler said he’s been picking the brain of Seahawks receiver Tyler Lockett in preparation of playing with Wilson.

“I’m a big fan of Tyler’s game, and me and him have talked a lot,” Hamler recently told The Athletic. “I’ve just been picking his brain, like, ‘How does Russ handle these situations?’ It’s being a sponge, absorbing knowledge from two Pro Bowl guys. I put on Tyler’s film and I’m like, ‘OK, he did this and he did that.’ And then it’s, ‘OK, I can do all this.’ I’ve just got to go out there and play and get back on the field.”

Wilson and Lockett sported uncanny chemistry in their seven seasons together in Seattle. The duo was particularly potent when plays broke down and a scramble drill ensued. Lockett knew what Wilson was looking for, and the QB knew where his receiver would be.

Hamler has the speed and hands to play the Lockett role in Wilson’s offense in Denver, but first, the former Penn Stater must get back to full health after tearing his ACL just three games into the 2021 season. Hamler was seen running light routes last month in one of Wilson’s workouts in San Diego, and general manager George Paton noted last week the receiver was “well ahead of schedule” in his rehab.

Hamler told The Athletic he expects “to be ready before the season,” but he’s not trying to rush through the rehab process. 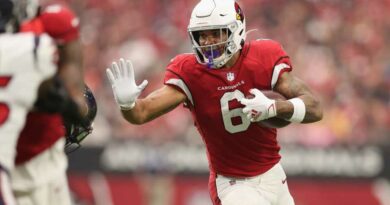 Patrick Mahomes Ruled Out Of Chiefs-Broncos After Suffering Leg Injury