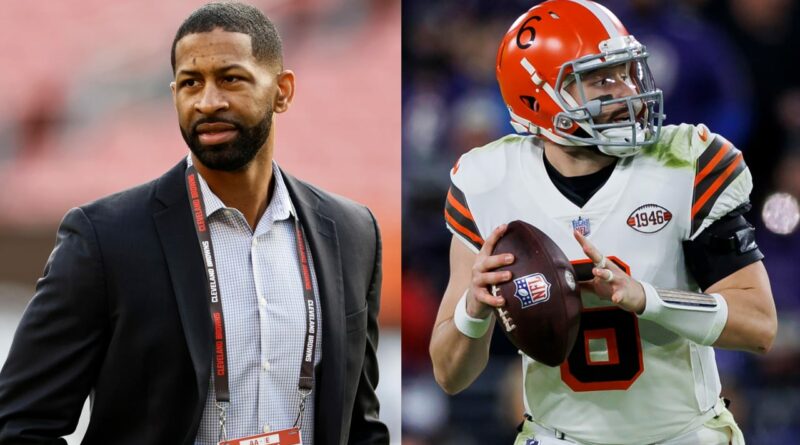 Another week has brought a fresh round of questions regarding the future of the Browns with ﻿Baker Mayfield﻿ as their quarterback.

After Cleveland mustered a grand total of 10 points in a very winnable primetime game against the Ravens on Sunday night, all eyes have turned toward Mayfield, the quarterback who is struggling through injuries to try to generate some offense. He simply hasn’t done so, completing 18 of 37 passes for 247 yards, one touchdown and a forgettable 79.4 passer rating in the 16-10 loss to Baltimore.

That type of performance meant general manager Andrew Berry had to speak on Cleveland’s future under center yet again on Wednesday.

Most will roll their eyes at this type of response, because while it’s accurate to a certain degree, it also doesn’t point toward Mayfield, who is far from the playmaking quarterback he was in Cleveland’s run to a postseason win in 2020.

“I think we all know that Baker is incredibly physically tough. … That being said, he has had stretches this year where he has played well for us,” Berry continued. “Look, the reality of it is he’s worked through injuries no different than other players on our roster, but I know he expects of himself and we expect him whenever he’s on the field to perform at a capable level and a winning level and we expect him to play his best football down the stretch here after the bye.”

Without a legitimate passing threat, opposing defenses now own the blueprint to shutting down Cleveland’s offense: Load up against the run and dare Mayfield to beat you with his arm. He can’t do it with his legs due to various bumps, bruises and legitimate injuries (shoulder, knee, foot), eliminating an essential part of his game. When faced with frequent pressure, Mayfield has nowhere to turn except to dump-offs, and with a running game that has struggled to pick up yards on early downs against stacked boxes, the Browns have become a chuck-and-pray offense on third down.

They converted 4-of-13 third-down attempts Sunday night and couldn’t do much of anything in the fourth quarter in a one-score game. Fans clamoring for more handoffs to ﻿Nick Chubb﻿ and Kareem Hunt were instead forced to watch them slam into walls of defenders before turning to Mayfield, who had little time to (and hopes of) convert these unlikely third-and-long situations. And without a deep threat — rookie ﻿Anthony Schwartz﻿ was inactive due to injury — Cleveland’s offense is shortened.

The Browns intercepted Lamar Jackson four times Sunday night and only put 10 points on the board. They reached halftime with three interceptions — and three points.

The most important question regarding Cleveland’s future with Mayfield is simple: Is he the guy the Browns believe can be their franchise quarterback?

Timing matters, of course, with regards to Mayfield, who is in his fourth season and is under team control via a fifth-year option in 2022. If Mayfield was playing well, the conversation would be about what type of annual salary he would command from the Browns. But because he’s not that player at the moment, Cleveland is in an interesting position under center that could foretell change beyond 2022.

At 6-6, the next five weeks are crucial for these Browns, who are still very much in the playoff hunt but can’t afford more of the same struggles from their offense if they want to reach the playoffs for a second straight season. That stretch of games includes meetings with Baltimore, Pittsburgh, Cincinnati, Las Vegas and Green Bay. There isn’t an easy matchup left on the slate.

It’s an opportunity for Cleveland to rise above the adversity it has faced, and for Mayfield to prove he can still be the team’s franchise quarterback, despite his own health hurdles. But things have to go right for that to become reality, which is important, even if Berry downplayed the role of Mayfield’s performance in his overall evaluation.

“I don’t know it’s so much about showing me anything,” he said. “Really, our focus is on winning games and playing at a high enough level that allows us to be in a strong spot in December. That’s really where the focus is. I think Baker has shown a lot over the past four, or I guess three-plus seasons. So I don’t necessarily subscribe to this notion that there’s something in this next five games that’s of particular focus.”

Cleveland doesn’t have to do anything contractually with Mayfield in 2022. They can play out the string on his current deal and see what comes of it, with the franchise tag available in their back pocket to buy one, or maybe even two more years to evaluate him from a long-term perspective.

Mayfield can change that by playing well down the stretch of 2021, or throughout 2022, which would prompt the Browns to strike a secure deal with him. Or, he could flop, producing a worst-case scenario for the Browns in which they’d again be tasked with finding a new quarterback.

Cleveland is hoping the latter ends up as nothing more than a hypothetical, but determining their future begins with the next five weeks — even if Berry isn’t ready to admit it.

Bruce Arians: Buccaneers ‘can definitely win’ with QB other than Jameis Winston 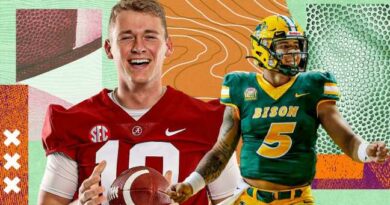 New 2021 NFL mock draft: Kiper makes trades for the first time ever, with QBs moving up