With a potential suspension looming for new quarterback Deshaun Watson — who faces 22 civil lawsuits alleging sexual misconduct — and the anticipated departure of Baker Mayfield, the Cleveland Browns have brought in Jacoby Brissett as a backup quarterback who could fill in as the starter.

Brissett’s career has been defined by being the backstop QB thrust into the starting role.

“I wouldn’t be in the position that I am in today if I worried about (knowing if I was going to start or not),” Brissett said Wednesday, via the Cleveland Plain Dealer. “I’ve always prepared myself like a starter. I carry myself like a starter because when those opportunities present themselves, I want to show that I am that.”

Since being drafted in the third round of the 2016 NFL Draft by the New England Patriots, Brissett has majored in bailing out teams in need of filling the starting hole. As a rookie, he made two starts when Tom Brady was suspended and Jimmy Garoppolo got hurt.

The following season, he was traded to Indianapolis at the onset of the campaign after Andrew Luck suffered a season-ending injury. Two seasons later, when Luck abruptly retired during the preseason, Brissett was again thrust into the starting role.

Then, last year in Miami, he made five starts in place of an injured Tua Tagovailoa.

For Brissett, the unknown has become comfortable. He just always prepares as if he’ll start.

“I can’t predict whatever the case may be with the outside the field stuff,” Brissett said, “but what I know is true is that you’re always one play away. And that’s what I prepare for, and I obviously prepare like I’m the starter, regardless of the situation.”

With Watson’s civil cases hanging overhead, it’s possible the NFL could suspend the quarterback at some point this year. If that happens, Brissett will step in for a team that aspires to return to the postseason.

“I think it’s just me believing in myself and trusting what got me to the point that at whichever level I was at and really just falling back on that and trusting the hard work and going back to, ‘What do I know about football?’ and trusting that and going out there and playing football and doing what I’ve done since I was a little kid,” he said. 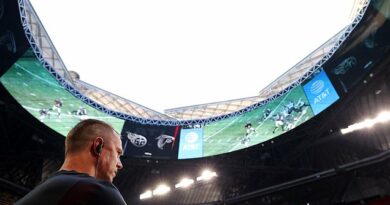 Atlanta Falcons have all players vaccinated against Covid-19