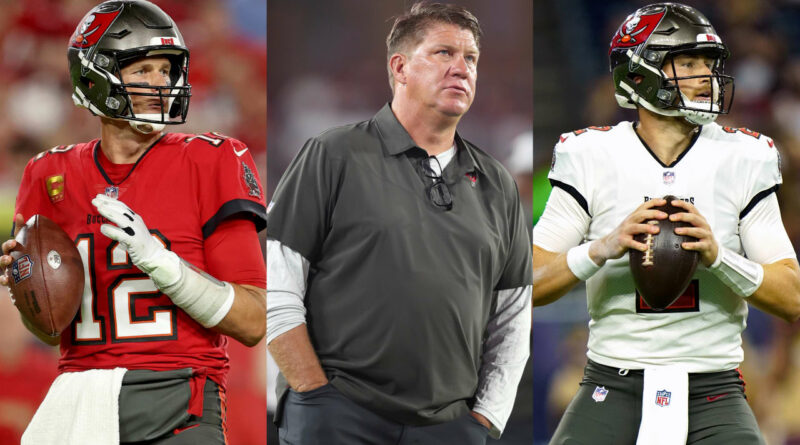 In the aftermath of ﻿Tom Brady﻿ announcing his retirement and the afterglow of celebrating his career, the Tampa Bay Buccaneers must address what’s next for the franchise under center.

Though it’s likely impossible to truly replace Brady, somebody will be called upon to take his spot as the Bucs’ QB1.

As Tampa Bay general manager Jason Licht commemorated Brady’s illustrious career on Monday, he also addressed the TB12-sized vacancy left on the NFC South champions’ roster and indicated the team is ready to exhaust all options, which includes the development of second-round pick ﻿Kyle Trask﻿.

“We’ll have to go down every avenue,” Licht said. “It’s a little bit different landscape than it was a couple years ago with the quarterbacks that were available in free agency. So, we’ll have to go down every avenue, we’ll turn over every stone. I hate to use clichés like that, but we will. I think our roster is in better position than we were two years ago in terms of the young talent we have, the experience they have at this point, what we’ve gone through in the last couple years. So I’m excited about that.”

Among the Buccaneers’ 2021 QB stable of Brady, Blaine Gabbert﻿, Trask and Ryan Griffin﻿, Gabbert was the only quarterback besides Brady to see action in the regular season. Trask is the only QB (other than Brady, technically) under contract for the 2022 season, as Gabbert, who appeared in six games and completed 7 of 11 passes for 67 yards, and Griffin are impending free agents.

Though the future would seem cloudy, Licht knew Brady’s retirement was on the horizon.

“It’s something that we knew is going to happen at some point,” he said. “It didn’t completely shock us in the last 24 hours, to be honest with you, that this could happen — so we had been preparing. We were in this situation a couple of years ago where Bruce (Arians) and I had both said we would have to look behind door No. 2, and we’re at that position again. Now, we feel like we’re very excited about the development of Kyle; where he’s come from in the last year and what he’s done, just being able to sit behind Tom and Blaine and Ryan, as well.

“We’re going to explore all avenues to try to make the best decision that we can for the organization, but it didn’t come as a surprise.”

For Licht, Monday was more about saluting Brady’s bountiful autumns than pondering the seasons to come, though the monumental task at hand will command the spotlight following Brady’s announcement.

“I think it’s important that we just look at the entire team, as well,” Licht said. “In the last couple years, we’ve won a lot of games. It’s been a team effort and Tom would be the first to tell you that. Tom is an unbelievable quarterback — the best. We will have to make decisions and figure out what we think is the best decision moving forward for the Buccaneers, whether that’s someone in-house, whether that’s the draft, there are trades, there is free agency. We’ve been working on it right now. Today isn’t the day that I want to give out our plan of what we are going to do. It’s more celebrating Tom and what he has done for us, which has been very substantial to say the least.”

As Brady was a catalyst for two seasons of triumph, the Buccaneers’ 2022 starting quarterback might well have the biggest cleats to fill in NFL chronicle. Now, Tampa is saddled with maintaining its newly found standard of winning while also tempering its expectations at quarterback after two years of operating with the G.O.A.T.

“I have a lot of faith [and] I know Bruce does, as well,” Licht said. “I know our coaching staff, my staff and the entire building has a lot of faith in the players that we have on this team. We will continue to add. I think the experience they’ve had the last couple of years has made this team a lot better. There is no replacing — you are not going to find another Tom Brady, but you can find a good player and you can develop good players. Everyone will step up and they’ve learned throughout the last couple of years how to do that. I think just the experience that they’ve had the last couple of years playing with Tom Brady are lessons that are invaluable. We’re very excited about the future still. We’re very excited about the team that we have, and we will just continue to march forward.”

The 6-foot-5, 236-pound Trask saw his only action as a rookie out of Florida come in the preseason. Still, Licht stressed patience with the prospect rather than scrambling to get him ready to take over the reins of a Super Bowl contender.

“I don’t necessarily think we need to speed up the process with Kyle because I think we have him on a good track right now and he’s been well-coached and he’s had unbelievable resources to lean on to get to where he is right now, but we will see where that goes,” Licht said. “We don’t want to rush anybody, but I couldn’t think of a better experience for a young quarterback to spend his rookie year than with the greatest player of all time.”

Whether the task of leading the Bucs goes to Trask or someone else, Arians made it clear following the team’s Divisional Round loss to the Los Angeles Rams that there are no plans to rebuild, and Licht mirrored those aspirations.

“We feel like we have a really good foundation on our team,” the GM said. “I think BA has already said that this isn’t a rebuild, this is a reload. I look at it a little bit as a remodel.

“We do not feel at all like we’re in a situation where we have to completely start from scratch with this roster whatsoever. We have a lot of good players and a lot of teams wish they were in our position.”

The search for the Buccaneers’ next starting quarterback began on Monday as the greatest of all time called it a career, but Tampa Bay’s great expectations remain. 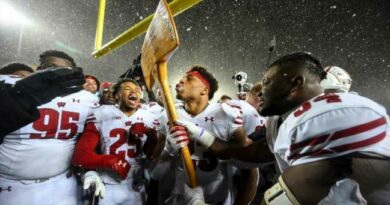 Which of these traveling trophies will have a new home after Rivalry Week?