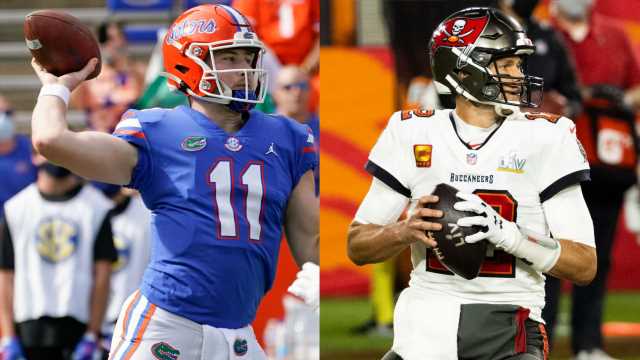 Surprising nobody, when the Tampa Bay Buccaneers took Florida quarterback Kyle Trask on Day 2 of the 2021 NFL Draft, there were no rumblings of a quarterback controversy coming.

While Trask might well be the heir apparent in Tampa, Tom Brady is still going strong at 43 years young and nobody’s clamoring for the Bucs to move on from the reigning Super Bowl Most Valuable Player. Nonetheless, the Bucs might very well have found their QB of the future and general manager Jason Licht believes Trask will find himself in the perfect spot to prosper.

“Looking forward to having him in the building and in time developing him. Like I said in the previous press conference, this is a great place for a quarterback to come and be groomed,” Licht said Friday night after selecting Trask with the final pick of the second round (No. 64 overall). “To be playing with the G.O.A.T. and you have some great, great coaching — great coaching staff.”

As Brady continues to defy logic when it comes to age and slowing down, Trask will have little pressure at the onset of his Buccaneers days. After all, Brady just inked an extension through 2023 and is coming off one of his finest seasons, hard as that is to contemplate.

Trask will instead have the opportunity of finding his way and improving his game while backing up the greatest of all-time.

“Of course he’s competitive. He wants to play, but he also is very realistic and knows that he is not ready-made,” Licht said. “At least from our conversations, this is a perfect opportunity for him to sit as long as he has to sit. We’ll see.”

Trask is coming off a monster senior campaign in Florida in which he threw 43 touchdowns to eight interceptions and tallied 4,283 yards in 12 games. Still, he’s seen as a project by most and he’s prepared to put in the work.

“They definitely have a great system going on down there in Tampa Bay,” Trask said Friday. “The opportunity to learn from one of the greats that I watched growing up, that’s been one of my favorites — to have that opportunity is truly remarkable. But nevertheless, I’m gonna come in and work my tail off and do whatever I can to help this team.”

On Friday night in Cleveland at the conclusion of the second round, the Buccaneers might well have found their next starting quarterback. But it’s going to be some time before that happens, and it appears as if Licht, Trask and everyone involved is just fine with that.