Home » NFL » Cam Newton to the Patriots rumors are dead in the water, according to report

With Tom Brady in Tampa Bay, Andy Dalton in Dallas and Jarrett Stidham the current QB1 on the Patriots’ depth chart, some connected free-agent quarterback Cam Newton to Bill Belichick and the Patriots.

According to a report from The Athletic, the Patriots aren’t too hot on the hottest quarterback free-agent commodity. The reason: New England OC Josh McDaniels “wasn’t necessarily high on Newton” when speaking with the Panthers about their head coaching vacancy. Couple that with New England’s limited cap space, and the fit is imperfect at best.

Some pegged New England as the most likely landing spot for Newton after Brady signed with the Buccaneers, leaving a starting QB vacancy in Foxborough. Newton’s injury history and reported desire to be a starter have, reportedly, turned teams off from wanting to sign him.

Newton, 31, has dealt with various injuries in the past few years, with a shoulder problem leading to on-field issues since his 2015 MVP campaign and Super Bowl appearance. He missed 14 games last season after dealing with a foot injury.

There’s still plenty of time left for New England to change its story on the former Panthers quarterback, but at the moment, any Newton-to-New England rumors should be treated as that and nothing more. 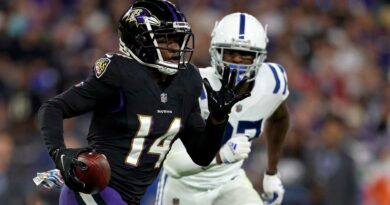