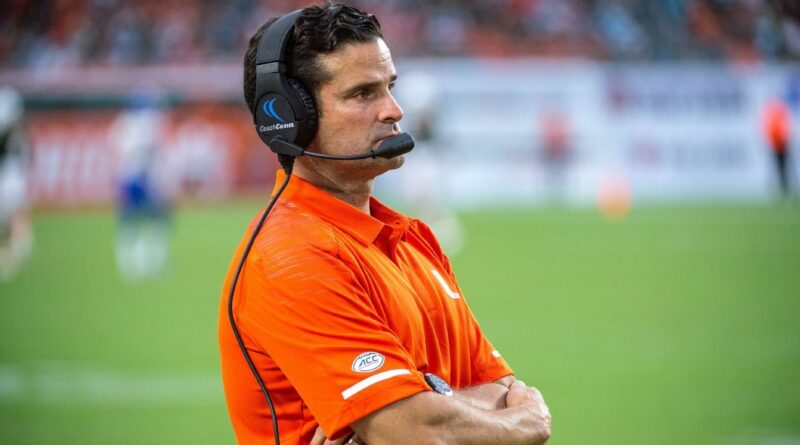 Miami coach Manny Diaz defended his program and the school administration Monday, after pointed criticism that there was not a strong enough commitment to football from the university.

Kirk Herbstreit questioned that commitment on College GameDay on Saturday, in comments that went viral and made their way to Diaz. Herbstreit questioned whether the athletic department was willing to make changes to support football, noting there remain ongoing problems that have kept Miami from being a national power over the last decade.

Diaz opened his Zoom press conference with a statement pushing back on those comments, noting university President Julio Frenk led the charge for the season to move forward during the coronavirus pandemic last. “That would be a strong take for someone that didn’t really seem that interested in athletics,” Diaz said.

Diaz also pointed out the improvements the Hurricanes have made to their facilities — including building a new indoor practice facility and new dorms — with a project to renovate the locker room up next. But he also acknowledged the uneven playing field throughout collegiate athletics when it comes to revenues and resources.

“There will always be somebody with more resources,” Diaz said. “That’s not a Miami problem. That’s a college football problem with a capital P that no one really wants to talk about. But our best resource here at the University of Miami has always been our people.

“If you want your organization to be better, you add better people to the organization. With a supportive administration, our staff has improved every year, our support and recruiting staff has increased and gotten better every year, and our locker has gotten better every year,” Diaz said. “It’s not where we need to be yet. But the only way forward at the University of Miami is through recruiting, and we can’t turn and push our recruits away from our program because of something that happens in the short term.”

After Miami lost 38-17 to Michigan State in Week 3, the Hurricanes fan base went into panic mode and started questioning whether Diaz is the right coach to lead the program forward. Miami enters a crucial game against Virginia on Thursday night at 2-2, but the bulk of the questions Monday focused on the state of the program.

Diaz said repeatedly the Hurricanes need time to stack recruiting classes together to help elevate the program, pointing to the model Clemson used to build itself up to a championship contender every year. But he also noted that Miami must be better now, taking full responsibility for the way the Hurricanes played in losses to Alabama and Michigan State.

“You can compete in the ACC, which is still our standard, but you can still have a long term vision of what it takes to build a roster,” Diaz said. “I’m responsible for our performances this year. But I still know the way forward is that you’ve got to be able to stack classes. You look at what Clemson did when they were building and they couldn’t get past Jimbo (Fisher) and the Seminoles.

“They kept recruiting, they got a transformative quarterback and then another one, than another and that’s how they got to where they are. There’s a pattern of how these things occur, but I don’t think they were sitting there saying, ‘We’ll be fine when Trevor Lawrence gets here.’ They were still trying to compete at that moment.”

Diaz, in his third year at Miami, also knows what is on the line for the remainder of the season. Despite the struggle to start the year, Miami has its entire ACC schedule ahead, with an experienced team that Diaz acknowledges must play better moving forward.

“Our expectation is to go perform,” Diaz said. “We know what’s at stake on these next eight weeks. And we think we got as good a shot as anybody.”