Home » NFL » Cardinals' Chandler Jones not focused on contract: 'I play best when I don't go in thinking about the deal' 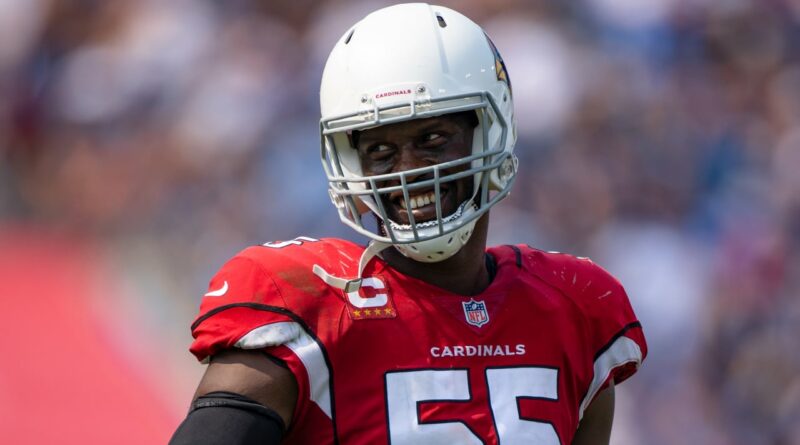 Arizona Cardinals pass rusher Chandler Jones was relatively quiet about his desire for a new contract in the offseason, then spoke volumes about it on Sunday against the Tennessee Titans with a franchise record-tying five sacks. On Wednesday, he finally did some talking off the field. Apparently, the 10-year veteran has kept the contract subject out of his mind, as well as his mouth.

“I think I play best when I don’t go in thinking about the deal,” Jones said, per the team’s website. “… I’m just playing football, honestly. I’m letting my agent take care of all of that. It is the last year of my contract and I let that take care of itself.”

He’s certainly taken care of it so far.

The Titans had no answer for Jones on Sunday, who amassed all five of his sacks over the first three quarters and forced a pair of fumbles. An injury shelved Jones for most of last season, but Sunday showed that he can still recapture his 2019 form, when he tallied 19 sacks and an NFL-high eight forced fumbles, and was named All-Pro.

He’s now playing on the final year of a five-year, $82.5 million contract.

“You saw what type of talent he is, he knows what he is,” coach Kliff Kingsbury said. “I know he wants more money and he’s probably deserving of it. It’s part of the business. But the way he’s handling himself and the way he’s treating his teammates and coaches, it’s phenomenal.”

Jones missed offseason OTAs, the Cardinals’ minicamp and the beginning of training camp with a minor injury. But once he returned healthy, he practiced with what Kingsbury described as a “chip on his shoulder.” On Wednesday, he confirmed he even requested a trade in the offseason.

Now, however, his focus is locked in, and Sunday marked a rousing start to what could be a bank-breaker of a season where a new contract is concerned.

If keeping his mind off that topic helps Jones play at his peak, he might not speak of it again this season — at least until Sunday’s home game against the Minnesota Vikings.