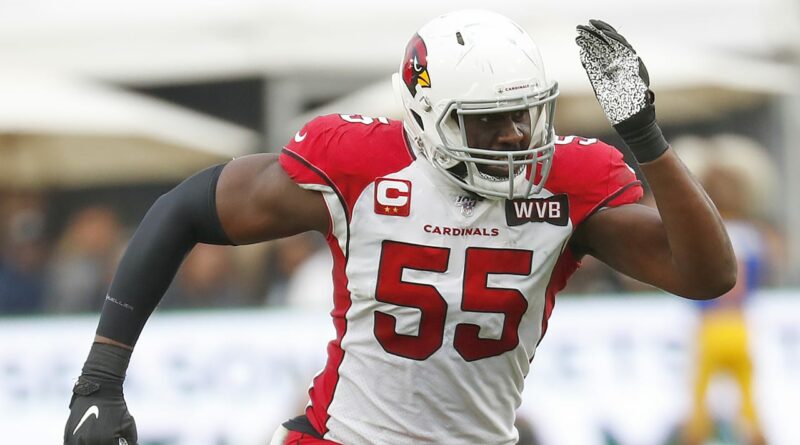 Teams across the NFL are making atypical roster moves or are preparing to do so in the weeks ahead in order to adjust to a 2021 salary cap that’s expected to be tight. This will result in some surprise cuts.

Our own Gregg Rosenthal took a look at such potential cuts and identified a few possible stunners. One was Cardinals edge rusher ﻿Chandler Jones﻿, who played just five games last season due to injury and carries a $20.8 million cap number into his age-31 season of 2021.

Cutting Jones would free up over $15 million in space for the Cardinals, who aren’t yet up against the cap but should be expected to spend on improvements after falling short of the postseason in 2020. Jones has been outrageously productive as a Cardinal (61 sacks in 69 games), but is entering the final year of his deal. The risk, as Rosenthal wrote, is keeping Jones and getting another injury-laden season, or cutting him a year too early and missing out on his impact.

The most likely outcome is that the Cardinals keep Jones, as Keim essentially confirmed Friday. They might also be in the market for a big name who is highly sought after across the league. Keim’s advantage in the pursuit of J.J. Watt: His former star teammate is now a Cardinal.

﻿DeAndre Hopkins﻿ took to social media to push for Watt, posting a photoshopped image of the two in Cardinals uniforms this week on Instagram. It’s not entirely unrealistic for the Cardinals, who have roughly $11 million in cap space as it stands now with a projected cap of $180.5 million, a number just barely above the new floor of $180 million.

“I don’t want to get into details, but as you know, if there’s an opportunity that makes sense on both the football side and the business side, we will certainly take a swing,” Keim said of a potential pursuit of Watt. “It’s certainly fun to see your players get involved. Obviously, Hop’s a guy that I’ve got a great deal of respect for and not just as a player, but obviously the addition of him has certainly improved our recruiting game.”

The Cardinals could make it work in the immediate, but with the lower cap considered, they don’t want to handcuff themselves when they could improve elsewhere. There’s fantasy and there’s reality, and sometimes the gap between the two is larger than one would like to admit.

It’s fun to dream. It’s also fun to build a well-rounded team, and not chase stars. The Cardinals already have one in Jones. We’ll see if another is in their future.