As Christian Matthew entered the Arizona Cardinals’ facility for the first time during rookie minicamp Friday, he took some time to think back on the path he took to get to this point, and the decision he almost made to leave football behind.

“I had to take a moment,” the cornerback said Friday, via the team’s website. “That was surreal.”

Matthew started his college career with NFL aspirations, committing to play at Georgia Southern out of high school. But various issues, including eligibility concerns and coaching changes led to him transferring to Samford, and then again to Valdosta State as a graduate transfer, where he spent the last two years.

But just as Matthew joined the Blazers in 2020, his new team felt the affects of the cancellations that the COVID-19 pandemic forced on the sports world, and Valdosta State was hit harder than most. While many NCAA football teams were able to salvage an abridged 2020 season, the Valdosta State athletic department had to cancel all of the team’s games. With his season gone and no clarity on what came next, Matthew said he started to think about whether there was any point in pursuing football beyond college.

But it was at this point that his family and friends sat him down and reminded him that while he could always come back to being a manager, getting a chance to play in the NFL was an opportunity that he shouldn’t let go.

“I was real close, but my friends and family kept me with a level head, ” Matthew said. “My girlfriend had a real candid conversation with me, she let me know, if I really want to do it, she supports me. But at the same time, my opportunity to live out my dreams and play football at a higher level, that window is way smaller than the window of being a manager at Walmart.”

With a renewed focus on achieving this long-time dream, Matthew proved himself worthy of the pros when Valdosta State football came back in 2021. He helped lead the Blazers to a 12-2 record and the Division II national title game, playing in all 14 games. He finished the season with 37 total tackles, 26 solo stops, one interception, 15 pass breakups and one blocked kick.

And a few weeks ago, his name was called on Day 3 of the 2022 NFL Draft as the No. 244 overall pick for the Cardinals. He was just the sixth player from Valdosta State to ever be drafted and was the fourth Division II player selected this year. For Matthew, the moment marked the culmination of all his hard work as he got to realize his dream of being drafted by an NFL team.

Matthew still has a few hurdles to clear in order to make Arizona’s 53-man roster and fully realize the goal of playing in the pros. But either way, after having gone through the hardships and doubts he has, he’ll still be satisfied knowing that he fulfilled a dream that almost never got off the ground.

“(This is) a forever thing,” Matthew said. “No matter what happens, that (draft) phone call definitely changed my life.” 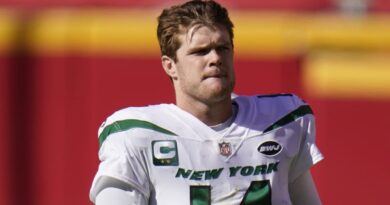 NFL Week 6 roundtable: Who will be last undefeated team standing?