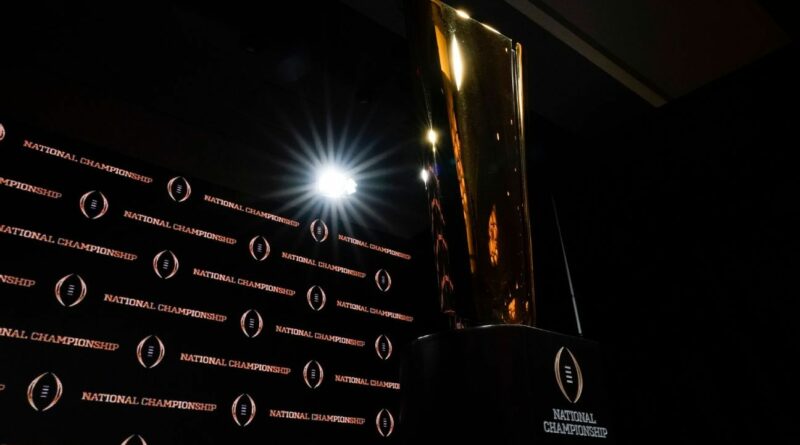 The College Football Playoff management committee will consider expanding to a 12-team format when it meets in Chicago next week, marking the first step in what could be another historic change for the sport’s postseason.

The proposal, a copy of which was obtained by ESPN, calls for the bracket to include the six highest-ranked conference champions and the six remaining highest-ranked teams as determined by the CFP selection committee.

“No conference would qualify automatically and there would be no limit on the number of participants from a conference,” the proposal states.

The proposal, which was written by a subcommittee made up of Big 12 commissioner Bob Bowlsby, SEC commissioner Greg Sankey, Notre Dame athletic director Jack Swarbrick and Mountain West commissioner Craig Thompson, is only the first step in a long process.

The 10 FBS commissioners and Swarbrick must agree on a format when they meet June 17-18 to discuss the topic in person for the first time since before the coronavirus pandemic. While the four members of the working group have spent the past two years researching the possibilities to ultimately conclude that 12 teams provides the best opportunity, it’s possible the seven other members of the management committee support another format.

Under the proposal for a 12-team format, the four highest-ranked conference champions would be seeded 1-4 and receive a first-round bye. Teams 5-12 would play each other in the first round on the home field of the higher-ranked team. The quarterfinals and semifinals would be played in bowl games, and the national championship game would remain at a neutral site.

If the group reaches a consensus, it will present the plan to the 11 presidents and chancellors who make up the CFP’s board of managers at a meeting in Dallas on June 22. If the board of managers approves the plan, the commissioners and Swarbrick will use the summer to figure out how to implement it — and when.

Another meeting is scheduled for September, and any changes to the format would ultimately be made by the presidents and chancellors.

CFP executive director Bill Hancock has said the playoff will not expand this year or next. The current 12-year agreement runs through the 2025-26 season.

Will Eli Manning be inducted in the Pro Football Hall of Fame?