The son of an NFL legend will be playing college football at Arizona State. Chad Johnson, Jr., the son of former NFL wide receiver Chad Johnson, committed to the Sun Devils Monday afternoon in an announcement on Twitter.

The younger Johnson is a four-star wide receiver prospect in the class of 2020 from Venice High School in Los Angeles, California. The 6-foot-2, 180-pounder holds offers from Oregon State and FAU, according to his 247Sports profile. He is ranked No. 19 among prospects in the class of 2020 from California, and No. 193 overall. He is the first member of the 2020 class to commit to play for Herm Edwards.

His father played 11 seasons in the NFL, primarily with the Cincinnati Bengals. He was a six-time Pro Bowler and ended his career with 11,059 yards and 67 touchdowns. 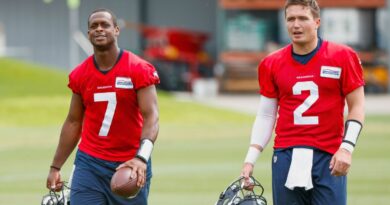