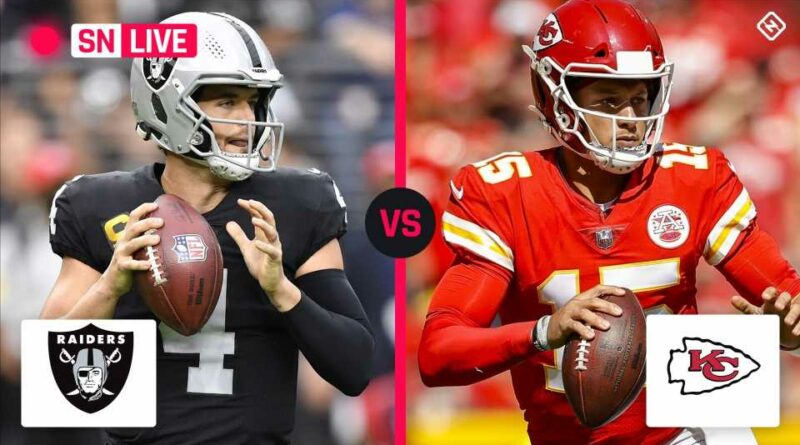 Week 10’s “Sunday Night Football” matchup will be a showdown between two AFC West rivals, the 5-4 Chiefs vs. the 5-3 Raiders.

This week’s game will mark the first out of two matchups for these teams this season. They meet again on December 12. Last year, the teams split their contests, each winning at their opponent’s stadium. The Chiefs open as 2.5-point favorites, so it’s expected to be a close game between these teams.

Sporting News is tracking scoring updates and highlights from Chiefs vs. Raiders on “Sunday Night Football.” Follow along below for updates from the NFL Week 10 game.

8:43 p.m. — TOUCHDOWN, CHIEFS. Tyreek Hill scores a touchdown to put the Chiefs on the board. The Chiefs drive was 89 total yards. Chiefs 7, Raiders 0.

8:39 p.m. — Travis Kelce catches an 11-yard pass from Patrick Mahomes for the first Chiefs first down of the game. They are on their own 39-yard line.

8:34 p.m. — After a false start penalty on offensive, the Raiders do not go for the fourth down and decide to punt the ball back to Kansas City.

8:28 p.m. — Josh Jacobs completes a first down for the Raiders, putting Las Vegas on their own 44-yard line.

The Chiefs vs. Raiders game will kick off at 8:20 p.m. ET at Allegiant Stadium in Paradise, Nevada. All “Sunday Night Football” games in 2021 are scheduled to begin at 8:20 p.m. ET.

How to watch Sunday Night Football

Chiefs vs. Raiders will be broadcast on NBC with announcers Al Michaels and Cris Collinsworth on the call and Michele Tafoya on the sidelines.