Chris Doyle resigned from his position with the Jacksonville Jaguars, a day after Urban Meyer announced the controversial hiring.

"Chris Doyle came to us this evening to submit his resignation and we have accepted," Meyer said in a statement released by the team. "Chris did not want to be a distraction to what we are building in Jacksonville. We are responsible for all aspects of our program and, in retrospect, should have given greater consideration to how his appointment may have affected all involved.  We wish him the best as he moves forward in his career."

Doyle was hired to be the Jaguars director of sports performance.

On Thursday after announcing the Doyle hire, Meyer said that franchise owner Shad Khan and general manager Trent Baalke signed off on the decision.

"I’ve known Chris for close to 20 years," Meyer said Thursday in a news conference. "Our relationship goes back to when I was at Utah and he was the No. 1 strength coach. I vetted him thoroughly along with our general manager and owner. I feel great about the hire, about his expertise at that position. We vetted him thoroughly and sports performance is going to be a high, high priority.”

The hiring was met with immediate scorn.

On Friday, Rod Graves of the Fritz Pollard Alliance — an organization dedicated to championing diversity in the NFL — called the hiring "unacceptable."

"At a time when the NFL has failed to solve its problem with racial hiring practices, it is simply unacceptable to welcome Chris Doyle into the ranks of NFL coaches," Graves' statement read. "Doyle's departure from the University of Iowa reflected a tenure riddled with poor judgment and mistreatment of Black players. His conduct should be as disqualifying for the NFL as it was for University of Iowa.

"Urban Meyer's statement, 'I've known Chris for close to 20 years' reflects the good ol' boy network that is precisely the reason there is such a disparity in employment opportunities for Black coaches."

Doyle left the Iowa Hawkeyes football program on June 15 after allegations of racism and bullying surfaced.

An external investigation by the Husch Blackwell law firm from last summer revealed that Iowa's Black players felt they were treated harshly.

"In sum, the program’s rules perpetuated racial or cultural biases and diminished the value of cultural diversity," the report said. "The program over-monitored players to the point that they experienced heightened anxiety and maintained a culture that allowed a small group of coaches to demean players." 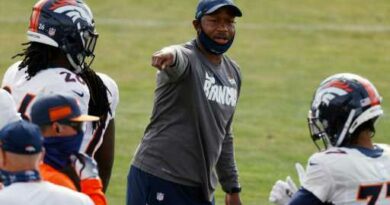