Clemson is blistering opponents at a pace unmatched in school or ACC history.

Everyone can thank Pitt and Syracuse for that.

Those losses — to the Panthers in 2016 and to the Orange in 2017 — do not belong in the past, not when they can be used to motivate a heavily favored team in October and November. There is a reason players such as Christian Wilkins and Clelin Ferrell decided to come back to school for their senior seasons, and it has nothing to do with losing in the regular season.

“The last couple years we slipped around this time, and that’s what guys don’t want to do,” defensive tackle Dexter Lawrence explained after another blowout win, 77-16 over Louisville. “We’re trying to leave a legacy, so guys are coming into practice with a different mindset, always challenging each other, pushing each other just to be great, from the scout team to the starters on offense and defense, it’s constant competing with each other.”

The recent domination began after a closer-than-expected win over Syracuse on Sept. 29, a game in which new starting quarterback Trevor Lawrence was knocked out. Since then, the numbers against Wake Forest, NC State, Florida State and Louisville speak for themselves:

The past four games have changed the way people view Clemson, from a team that survived Texas A&M and Syracuse to one that is rounding into form to potentially set up Clemson-Bama Part IV. The competition has been so lopsided, Clemson has thrown touchdown passes to two separate defensive tackles in consecutive weeks, thrown a touchdown pass to the coach’s son and thrown an attempted pass to offensive tackle Mitch Hyatt.

But we can stretch this blitz beyond the past four games. Clemson also has a school record for points scored over a five-game stretch (267) …

So what does this all mean as the No. 2 Tigers head into a crucial game against Boston College on Saturday night (8 ET, ABC)? A win clinches the Atlantic Division for Clemson for the fourth straight season, and that also would be a first for any team since the ACC formed divisions in 2005.

“I’ve been doing this a long time, and the focus of this group is special,” Clemson coach Dabo Swinney said. “They’re so committed to what we’re doing and what we want to accomplish. They prepare and practice the right way and believe in what they do. As coaches, we’re doing everything we can to help them get what they want to achieve. They want to be remembered forever, not just remembered.”

Last week, after Clemson dismantled ACC rival Florida State 59-10, Swinney praised his group for being the easiest team he has ever coached. But he also said he started pushing the players even more during the bye week in early October, which happened to come before a big game against unbeaten NC State.

The timing was perfect. Around that same time last season, Clemson went up to Syracuse on a Friday night as a 23-point favorite and lost 27-24. So the week off not only served as a good reminder for what is at stake, but a great time to get Lawrence more acclimated to his job as the starting quarterback.

The Wolfpack were supposed to present the biggest challenge to date, after taking Clemson to the wire in both 2016 and 2017. But Clemson won 41-7 and Lawrence had his first 300-yard passing game, showing for the first time how much further Clemson could go as an offense.

“Trevor’s getting better, he’s getting more comfortable,” co-offensive coordinator Jeff Scott said this week. “It reminds me of Deshaun [Watson] his freshman year, that Game 6, Game 7, Game 8, just getting better and better. Our guys really take that challenge of improving every week. It’s hard to get up there and tell them after what we did last week, but we found plays, things we could have done a better job with, and they found a way this week to get better. That will be our goal next week going into Boston College.”

Among all Power 5 conferences, Clemson is the only team with a greater than 90 percent chance to win its league. A 13-0 Tigers team would be guaranteed a spot in its fourth College Football Playoff.

Though deflating at the time, those losses to Pitt and Syracuse did not cost Clemson a playoff spot in previous seasons. In 2016, Clemson lost as a 21-point favorite to the Panthers at home in November, but the Tigers dropped only two spots to No. 4 because two other undefeated teams lost that week, too.

But nobody inside the Clemson locker room wants to leave their playoff opportunity to chance, and that is what would happen with a loss. If Clemson loses to Boston College, the Eagles would make the ACC championship if they win out. And one-loss Clemson, as a nonconference champion, would need help just to make it back into the top four.

Here is one potential key difference: Clemson overcame the loses to Pitt and Syracuse because it still won the ACC title. A loss to Boston College would completely alter the dynamic should the Eagles run the table. That’s why losing, in the minds of the players anyway, cannot be an option.

It is worth pointing out that among the past four teams Clemson has rolled, only one has a winning record (NC State). Wake Forest, Florida State and Louisville are a combined 3-15 in ACC play. Boston College is a step up from those three teams, but how much of a challenge will the Eagles present against a team that is hitting its stride?

“We feel like we’ve got one of the most talented teams and one of the of the most experienced teams ever to come through Clemson under Coach Swinney, so we’re trying to do everything we can to make sure we reach our fullest potential as a team,” Wilkins said.

And what is the fullest potential? 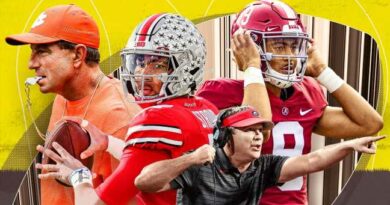 The 20 teams that can make the College Football Playoff