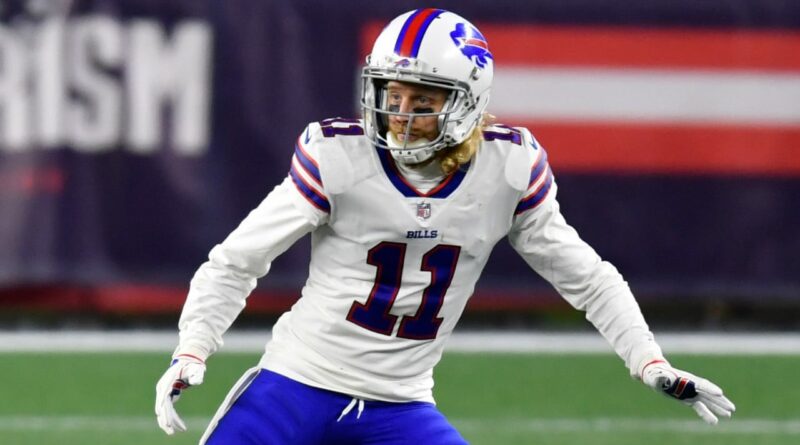 When Cole Beasley emerges out of the tunnel to do some pregame work, two things stand out:

1) The long, blonde hair, either flowing freely or put into some sort of a man-bun.

If you hadn’t seen Beasley catch 468 regular-season passes (for 5,016 yards and 33 touchdowns) over the last nine years, you might think he was a kicker … or a water boy. Trust me, he is neither. In fact, the receiver’s toughness is a big reason why a player listed at 5-foot-8 and 174 pounds (which seems generous) has not only lasted as long as he has, but has been as good as he’s been.

The latest chapter in the Cole Beasley story was his performance in Saturday’s wild-card victory over the Colts. Beasley hadn’t practiced fully since injuring his knee late in a Week 16 blowout win over the Patriots. Yet, there he was, at 1 p.m. ET, playing in 41 snaps and having an impact with a team-high seven catches for 57 yards. In fact, quarterback Josh Allen interrupted his postgame comments to single out his slot receiver.

“I do want to give a shoutout to Cole. Seven catches. On his knee. Getting through it. He’s tough as nails. To come out and play the way he did, it was awesome for us. He made a couple crucial catches for us.”

That sentiment was echoed by the people that matter the most for the Bills.

Fellow receiver Stefon Diggs lit up when I asked him about Beasley on Wednesday.

“As everyone knows, he was battling something last week, and went out there like the soldier that he is and fought through it,” said the first-team All-Pro, in his first season with the team — and with Beasley — since being traded from Minnesota in the offseason. “He fought through it for his brothers.”

Diggs knew Beasley would play because, as Beasley told us Tuesday, not playing the week prior drove him nuts.

“When I had to watch Week 17, it tore me up,” said Beasley. “I told [my teammates] there was no way I was watching another game. The pain I felt from watching that game mentally was worse than any pain that I was going to feel physically.”

The impact of that seems pretty clear.

“That means a lot from a receiver perspective, because you know there are guys that might sit or get a little more time, but he wanted to be a part of it,” admired Diggs, himself playing through an oblique injury. “He’s out there giving it everything he’s got. That gives you more motivation as a receiver and a teammate to be like, ‘S—, he out there giving everything he got.’ I know he hurt. So you gotta do it.”

Beasley wore a brace on his injured knee, and you could see him labor at times after the catch, and certainly when making his way either back to the huddle or the sideline. Adrenaline, and two weeks’ worth of commitment to play, got him through it, although he said the day after is “always the worst,” and “waking up (Sunday) was the struggle.”

Now as Beasley prepares on a limited basis for another huge tilt Saturday night against the Ravens, he thinks he’s in better position to be more of what he was during the regular season, when he logged a career-high 82 catches for 967 yards and four TDs.

“In my mind, I don’t think I’ll be as limited as I was last week. So that’s all I care about. I just want to be better than I was the week before,” he said, noting, “I don’t want to be a liability. It’s not about me and pride. I’ve got to put pride aside. If at some point in the game, I feel like someone can do it better than me, I gotta tell ’em and let ’em know that, because it would kill me if I cost the team.”

Going up against a swarming Baltimore defense in the Bills’ Divisional Round game this weekend, when he’ll likely see a lot of reps one-on-one vs. outstanding cornerback Marlon Humphrey﻿, Beasley will be challenged beyond the knee injury.

“He’s really strong, plays well in the run game, plays well with his hands and moves good for a bigger guy,” Beasley said of Humphrey. “He seems like he’s a dog and competitor, so I know he’s looking forward to the matchup, but this is what you live for, to go against the best guys.”

After spending the first seven seasons of his career as a complementary piece for the Cowboys, Beasley signed with the Bills in 2019 as part of a wave of offensive additions meant to help bolster Allen’s development. And while Beasley doesn’t get the recognition he deserves from the casual fan, he certainly gets it within the game, and the men he plays for and alongside in Buffalo.

“He’s been kind of under the radar for many years for his skill set and what he can do, but I just have so much confidence and trust in him,” said offensive coordinator Brian Daboll on Monday. “I wouldn’t expect anything less from him.”

“(He’s) just a guy that can create quick, short-burst separation. Those guys don’t come around too often,” said Allen on Tuesday. “In my opinion, we’ve got the best one in the league.”

An asset for the Bills, even at 31 years old and at way less than 100 percent, Beasley is a playmaker and a true tough guy. If you didn’t know it before this past weekend, you should know it now.

Tua Tagovailoa grateful to have Ryan Fitzpatrick as mentor