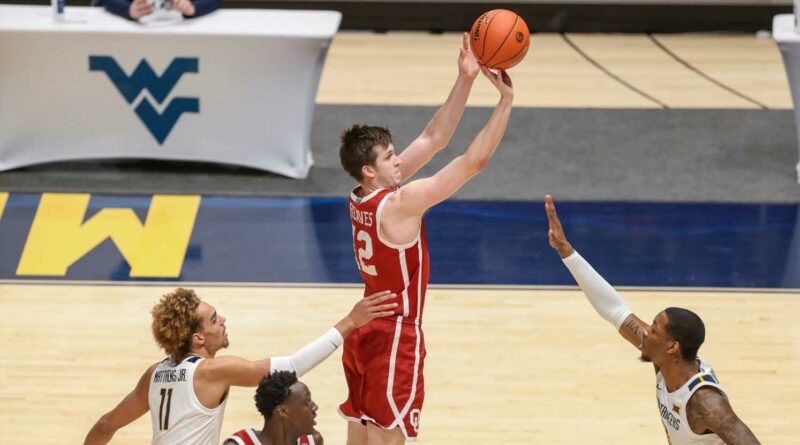 On the same day the NCAA Tournament selection committee rewarded the Big 12 Conference with five teams in its month-early top 16 seeds reveal – more than any other league – Oklahoma and West Virginia showcased the conference's parity and depth in one of the most thrilling games of the 2020-21 season.

Oklahoma survived West Virginia 91-90 in double-overtime off an Austin Reaves game-winner. The victory puts the Sooners (13-5), a projected No. 3 seed going into Saturday's game, even closer to the No. 2 seed line should any of the current top seeds falter.

Meanwhile the Mountaineers (14-6) continue to show that they're one of coach Bob Huggins most offensively gifted teams. WVU isn't a winner today because it's usually smothering defense was suspect, but its scoring proved to be as elite as Oklahoma's in the loss. Much of the spotlight in the Big 12 has gone to Baylor and for a portion of the year Texas, but both these teams are Final Four dark horses.

SNUBBED:  Four teams that should have been in the early top 16 seeds

Oklahoma. The Sooners are coming into their own and can use the double-overtime win over West Virginia as a propellant to finish this next month strong and peak in March when it matters. The hot-shooting Reaves is driving coach Lon Kruger's team to success, pouring in 28 points Saturday and averaging 15.8 points and 5.3 assists on the season.

Ohio State. The Buckeyes (17-4, 11-4 Big Ten) staved off Indiana 78-59 to win its sixth game in a row and continue its upward trajectory on the day the program was announced as a projected No. 1 seed in the NCAA selection committee's top 16 seed reveal. If OSU wants to secure a No. 1 seed on Selection Sunday, it'll have to keep beating teams like Indiana and rely on the strength of the Big Ten (the No. 1 conference in NET rankings) to outduel challengers currently at the No. 2 seed line.

Florida State. The Seminoles (11-3, 7-3 ACC) survived a near-upset, escaping ACC bottom-feeder Wake Forest 92-85 in overtime. Florida State was one of the teams close to consideration for the top 16 reveal and has been trying to reestablish a rhythm after missing games due to COVID-19-related postponements. FSU looked sloppy, but at least a résumé stain didn't come out of Saturday's outcome.

Connecticut. The Huskies (9-5, 6-5) were hanging on the wrong side of the NCAA Tournament bubble in USA TODAY Sports' latest bracketology as one of the first four teams out. But Saturday's much-needed 80-72 win over Xavier in Big East play pushes coach Dan Hurley's team in the right direction.

Kentucky. The Wildcats (6-13, 5-7) finally checked back into the win column, avoiding another collapse in getting past Auburn 82-80. UK's at-large bid hopes of reaching the NCAA Tournament are all but dashed but there's still a chance for coach John Calipari to salvage this season.

Texas. Coach Shaka Smart spearheaded this Longhorns team to a strong turnaround this season. Texas recently hit a skid but beating a team it should beat like TCU, 70-55, was a step in the right direction to get Texas back to its winning ways in a crowded Big 12.

Drake. The Bulldogs (19-2, 10-2 MVC) lost 81-54 to Loyola-Chicago in Missouri Valley action and that loss will be on the radar of the selection committee should Drake be gunning for an at-large bid on March 14. The Ramblers clearly looked like the better team but more importantly a previously unbeaten Drake squad now has lost two of three and could be in trouble — dipping in its seeding line close to the bubble.

West Virginia. Saturday's double-overtime loss to Oklahoma won't stain the profile by any means but it was a clash between two projected No. 3 seeds so the loss could hold weight on Selection Sunday if WVU's seeding line is close.

Tennessee. The Volunteers were honored as a projected No. 3 seed in the NCAA's early top 16 reveal and their overall success is holding them up whereas their play of late has been inconsistent. They are 4-4 in the past eight games. Tennessee was outplayed by LSU on Saturday in a 78-65 decision and that loss pushes the Vols out of second place in the SEC standings while also pushing them closer to a No. 4 seed in bracket projections.

Michigan State. The Spartans (10-8, 4-8) are another signature blue-blood program having an unexpectedly bad season and it was on display in a Big Ten loss to No. 16 Iowa. After winning two in a row, coach Tom Izzo was steering this team in a stronger direction but this group wasn't up to snuff against one of the Big Ten's best teams.

Arizona. The Wildcats (14-6, 8-6 Pac-12) lost a 63-61 nail-biter to Oregon and fell further down in the Pac-12 standings. Arizona has lost three of four and hasn't really solidified its team identity yet.