The dust hasn’t settled on Week 8 yet, but it’s never too early to look ahead to Week 9, especially when sports books are already posting odds for next week’s games including key conference battles in the SEC, Pac-12 and ACC that will help shape the College Football Playoff.

We’ll start with the biggest matchups of the week.

Lines you need to know

No. 7 Georgia vs. No. 9 Florida (+7.5) in Jacksonville: This annual rivalry has significant ramifications in the SEC East as these two teams are currently tied atop the division with Kentucky. This spread is a bit larger than I expected it to be considering Georgia’s 20-point loss to LSU, but the bye week likely did the Dawgs some good.

No. 14 Washington State at No. 24 Stanford (-3): Who could have known this game would be so important back in August, not for Stanford, but for Washington State and the Pac-12 in general. The Cougars are the only one-loss team remaining in the Pac-12, and therefore they’re the only realistic playoff candidate the conference has right now. A loss to Stanford would just about eliminate the Pac-12 from playoff consideration.

No. 2 Clemson at Florida State (+17): This game was supposed to be a lot more important than it will be, but even with Florida State’s early-season struggles, this spread seems large for a game in Tallahassee. That said, Clemson has been playing its best football of the season the last few weeks.

Other games of note

No. 18 Iowa at No. 17 Penn State (-7): Penn State has lost two straight games at home to Ohio State and Michigan State, and now it welcomes an Iowa team that’s off to an excellent start to the season.

Kansas State at No. 8 Oklahoma (-21.5): This spread tells you just about everything you need to know about this game for the Sooners. They’re very likely to win, the only question is how much will they do it by?

No. 3 Notre Dame vs. Navy (+22): The Irish nearly blew their season against Pitt two weeks ago, but had this weekend off. They’ll need that extra time to prepare for Navy’s option offense, though, to be honest, Navy might need the week to work on its offense more than Notre Dame does.

Best of the rest

No. 6 Florida upset by LSU after costly shoe throw 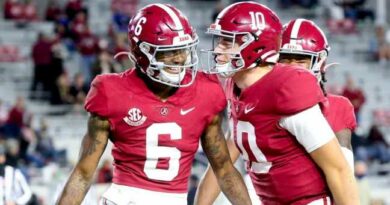