Only three Power 5 conference teams remain unbeaten and they’re being chased by a host of one-loss teams as the race for the College Football Playoff heats up. The Week 9 college football odds are out, and many of those contenders are facing tough challenges, according to Vegas. No. 7 Georgia is a seven-point favorite against No. 9 Florida in an SEC East battle, No. 9 Texas is favored by three against Oklahoma State and No. 24 Stanford is a 3.5-point favorite against No. 14 Washington State, already up a half-point from the opening line. With plenty of tight games that could shake up conference races and college football odds and lines already moving, be sure to check out the top Week 9 college football picks and predictions from SportsLine’s proven computer model.

The SportsLine Projection Model simulates every FBS college football game 10,000 times, and those who have followed it have seen massive returns. Over the past three years, this proprietary computer model has generated a jaw-dropping $4,210 profit for $100 bettors on its top-rated point-spread picks.

The model made some huge calls against the spread in Week 8, including nailing LSU (-6) over Mississippi State, Washington State (-3) over Oregon and Alabama (-29.5) over Tennessee. And when it comes to top-rated against-the-spread picks, it finished Week 8 on a strong 5-1 run. Anyone who has followed it is way up.

Now it has simulated every single play of Week 9 in college football and the results are in.

We can tell you it is calling for No. 16 Texas A&amp;M (+3) to not only cover, but get the outright upset on the road against Mississippi State.

Mississippi State’s offense was shut down by LSU in Week 8 as the Bulldogs were completely one-dimensional. MSU quarterback Nick Fitzgerald completed just 8 of 24 passes for 59 yards and threw four interceptions. The model projects Texas A&M’s defense, which is ranked No. 5 in the SEC, to keep Fitzgerald and the MSU offense at bay again. Texas A&M quarterback Kellen Mond throws for almost 250 yards as the Aggies hit against the spread in over 55 percent of simulations.

The Nittany Lions are looking to bounce back after losses to Ohio State and Michigan State and then a close call against Indiana. Bettors have shown initial confidence in 6-1 Iowa, bringing this line down from an open of -7.

But the model likes the value of Penn State against an Iowa squad that is largely untested. The Nittany Lions get almost 300 yards of total offense from quarterback Trace McSorley as they cover the spread in almost 70 percent of simulations.

The model has also made the call on who wins the huge SEC showdown between No. 7 Georgia and No. 9 Florida, and is projecting a top-10 team to get absolutely stunned in an upset that will shake up the 2018 College Football Playoff picture.

So what college football picks can you make with confidence in Week 9? And what title contender goes down hard? Check out the latest Week 9 college football odds below, and then visit SportsLine to see which teams are winning more than 50 percent of simulations, all from a proven computer model that has returned over $4,000 in profit over the past three seasons. 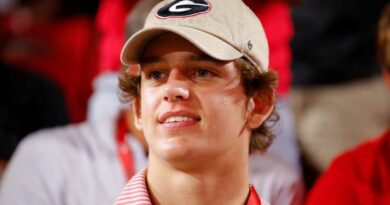 Arch Manning update: Where he stands in his college recruitment