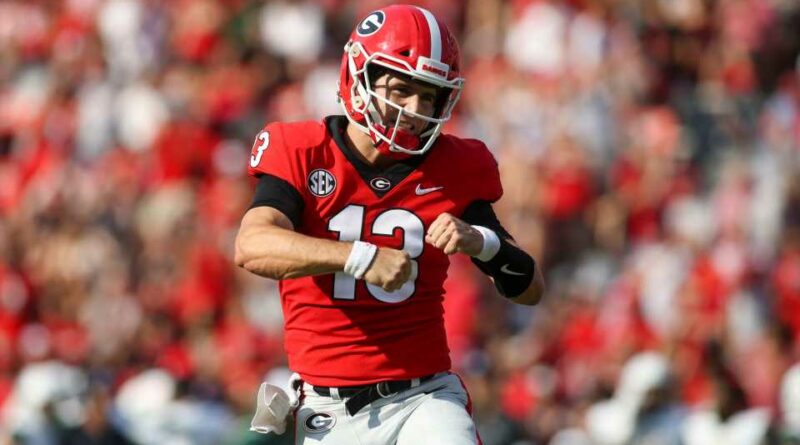 Conference championship weekend is here with 10 games to close out the 2021 college football regular season.

The SEC championship game is the main event. No. 1 Georgia takes on No. 4 Alabama in another clash between programs with national championship hopes. This is the fourth top-10 showdown between the teams since 2018.

There is more intrigue. No. 5 Oklahoma State and No. 9 Baylor meet in the Big 12 championship, and the Cowboys still have an outside shot to get in. No. 3 Cincinnati could become the first from the Group of 5 to make the CFP, but they have to win the AAC championship against No. 16 Houston to do it.

No. 2 Michigan will close the night with a chance to make the playoff for the first time, but it must get through No. 15 Iowa in the Big Ten championship game first.

Each week Sporting News made picks against the spread for every Top 25 matchup. A look at our track record:

With that in mind, a look at this week’s conference championship picks:

Week 13 Picks Against the Spread

The Hilltoppers are on a seven-game win streak, and their last loss was a 52-46 shootout against the Roadrunners on Oct. 9. UTSA had its perfect season ruined by North Texas last week, but the Roadrunners are at home. Western Kentucky quarterback Bailey Zappe adds to an FBS-best total of 52 TD passes, and the Hilltoppers get revenge in another Conference-USA shootout.

Didn’t we just watch this? Utah beat Oregon 38-7 at home on Nov. 20. The Utes have won five in a row, and now the Ducks get a rematch on a neutral site. Utah rushed for 208 yards and dominated time of possession, but in the rematch Oregon will make adjustments in its running game. Anthony Brown plays better in the Pac-12 championship game, and the Ducks win without feeling the pressure to make the Playoff.

Pick: Kent State wins 41-38 but FAILS TO COVER the spread.

The Cowboys beat the Bears 24-14 on Oct. 2, and now Oklahoma State can make a CFP case with a sweep of the Bears in a second straight top-10 matchup. Oklahoma State is 9-3 ATS. Jaylen Warren had 125 yards and two TDs in the first meeting, and that helped offset Spencer Sanders’ three interceptions.

Louisiana coach Billy Napier will try to leave for Florida on a good note in the Sun Belt championship game. Appalachian State hammered the Ragin’ Cajuns 41-13 on Oct. 12, and the Mountaineers have covered in five of their past six victories. Appalachian State holds on in a tighter contest this time.

This is Georgia’s chance to knock the Crimson Tide out in the SEC championship game, and perhaps the College Football Playoff. The Bulldogs allowed just 6.9 points per game in the regular season, but the Crimson Tide have won the past six meetings. Alabama has the best offense Georgia has faced, and Bryce Young could have a Heisman moment here. This just feels like the year when the Bulldogs break through.

Pick: Georgia wins 27-22 and FAILS TO COVER the spread.

The Bearcats can virtually clinch a Playoff spot with a victory against the Cougars, and this should be a good matchup. Houston has scored at least 30 points in eight straight games, and they will test the Bearcats’ defense. Cincinnati, however, has covered the past two weeks and looks dialed in. The Bearcats have won the past two meetings by an average of 17.5 points per game.

The ACC championship game won’t be a playoff spot, but it will be an entertaining matchup between two of the top-10 passers in the FBS. Pitt’s Kenny Pickett (4,066 yards, 40 TDs, 7 INTs) and Wake Forest’s Sam Hartman (3,711 yards, 34 TDs, 10 INTs). The Panthers have been favored in every game this season and are 9-3 ATS.

The Wolverines finally cleared the Ohio State hurdle and will carry a ton of momentum into the Big Ten championship in Indianapolis. That said, Iowa poses an interesting challenge with its physical style on both sides. Kirk Ferentz is 1-1 in two head-to-head matchups against Jim Harbaugh, and both games were old-school slugfests. Michigan will stay patient on offense, however, and the Hawkeyes will be out of their comfort zone in the second half. Michigan clinches its first playoff berth.

Pick: Michigan wins 27-19 but FAILS TO COVER the spread.

How the Patriots can win the 2019 Super Bowl: Pound the rock, conjure a blizzard and invent a pass rush