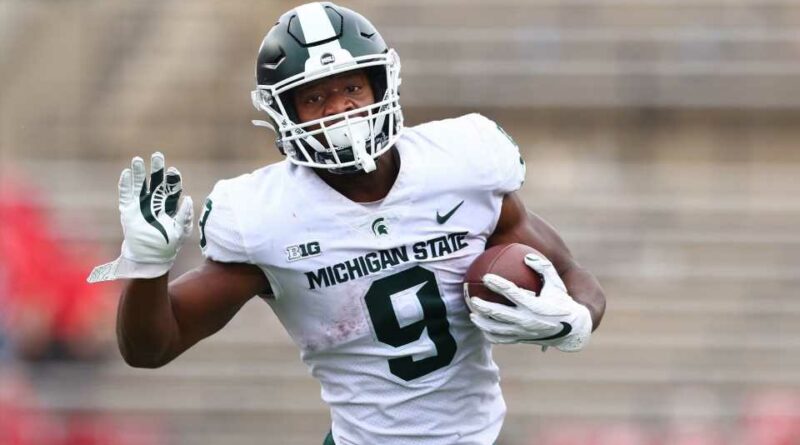 A top-10 Big Ten East showdown is the highlight of the Week 12 college football schedule.

No. 7 Michigan State travels to No. 5 Ohio State in a matchup with huge playoff implications. The Buckeyes have not lost a Big Ten game since 2015, and that was against the Spartans. C.J. Stroud and Kenneth Walker III can make a Heisman statement in that game, too.

There are two other games with ranked teams. No. 21 Arkansas faces No. 2 Alabama in a SEC West matchup, and No. 4 Oregon is an underdog at No. 24 Utah in a primetime matchup on ABC.

Each week, Sporting News picks every AP Top 25 game by the spread. Here is a look at our track record this season:

With that in mind, a look at this week’s picks:

Week 12 Picks Against the Spread

Memphis has lost three of its last four and is 0-4 ATS on the road this season. The Tigers have won five in a row in the series, a streak the Cougars end in style. Houston continues to barrel toward the AAC championship game.

The Aztecs are a double-digit road favorite, but the line has dipped two points from its open. That’s a nod to the Rebels’ two-game winning streak. UNLV will struggle to run the football against a San Diego State run defense that allows just 83.1 yards per game. We’ll take the value on the opening line.

The Spartans and Buckeyes have the two worst statistical pass defenses in the Big Ten. In the Buckeyes’ case, some of that is a product of teams playing catch-up. Michigan State did win at Ohio Stadium in 2015, but the last two trips to Ohio State have been miserable. This will be somewhere in between, and the two-point drop off the opening line reflects that.

Pick: Ohio State wins 38-24 and FAILS TO COVER the spread.

Iowa State coach Matt Campbell has turned this into a competitive series. The Cyclones are 2-4 against the Sooners since 2016, and all of those meetings have been decided by 10 points or less. Oklahoma bounces back from the Baylor loss, but it won’t be easy.

Clemson has won 32 straight home games, a streak the Demon Deacons will look to break in order to win the ACC championship. This is Clemson’s all-in game, too, but the Demon Deacons will put that streak to the test with their high-powered offense. It plays right on the line, but that home streak is there for a reason.

Pick: Clemson wins 30-27 but FAILS TO COVER the spread.

The Hawkeyes are still in the Big Ten West mix, but they are 1-3 ATS as a double-digit favorite this season. Illinois remains an unpredictable play under Bret Bielema, but they have played three straight one-score games. Iowa has won the last seven meetings in the series.

Georgia Tech is on a four-game losing streak, but they are 3-0 ATS as an underdog when the spread is 10 points or more. Notre Dame, however, has covered in five straight games. We like the Irish at home.

The Crimson Tide are 6-4 ATS this season, but that includes a 3-3 ATS mark against SEC competition. The Razorbacks are 2-1 ATS as an underdog and riding a three-game winning streak. The Crimson Tide have won 13 in a row in the series by an average of 29.5 points per game.

Pick: Alabama wins 44-24 and FAILS TO COVER the spread.

Cincinnati has failed to cover double-digit spreads the last four weeks, and that’s increased doubts about their playoff prospects. SMU is the best AAC team they’ve faced to this point, and the Mustangs have a pair of one-score losses on the road this season. Get ready for the same-old talk about the Bearcats.

Pick: Cincinnati wins 38-28 but FAILS TO COVER the spread.

Michigan has been a great play all season with a record of 8-2 ATS. Maryland is fighting for bowl eligibility, and the Terps rank 13th in the Big Ten in scoring defense (31.4). The Wolverines won’t be caught looking ahead to Ohio State.

We reserve to change this line if Brennan Armstrong returns from a rib injury that kept him out of the Notre Dame game. Pitt clinches a berth in the ACC championship game, and Kenny Pickett continues the Heisman campaign.

It’s a huge Conference-USA showdown, and the Roadrunners are trying to stay unbeaten. UTSA is 3-2 ATS at home, but it’s safe to say this is the biggest home game of the season. The Blazers have won the last four meetings.

The Badgers are rolling toward a Big Ten West championship, and they have allowed just 7.5 points per game in four straight victories. The Huskers have played ranked competition tough all season, but the Badgers are playing for something more.

BYU had an extra week to prepare for the Georgia Southern option, but the Eagles are at home. That will make the cover a little tougher for the Cougars, but we feel like the offense gets ahead early and presses Georgia Southern into mistakes. This still is too many points to lay on the road.

Syracuse needs a win to stay bowl eligible, and the Wolfpack are coming off an emotional loss. The Orange are 8-2 ATS, even with last week’s 41-3 loss to Louisville. We think this one plays out much tighter.

This line has shifted a bit, and it’s a fun matchup. The Ragin’ Cajuns are 8-3 ATS as a road underdog under Billy Napier, but they are 3-8 S/U in those games. Coming off a bye week, Malik Willis leads the Flames to a home victory.

The Bears are coming off a huge win against Oklahoma, but now they face the Wildcats on the road. The Wildcats have the longest win streak in the Big 12 at four games. We trust the Bears to get through on the road.

Vanderbilt lost 62-0 at Georgia and 42-0 at Florida this season. Will the Rebels drop a third goose-egg on the Commodores? This is a game we’d typically stay away from with that spread. Ole Miss cruises, but Vanderbilt gets a back-door cover.

Oregon remains the Pac-12 leader, but they are an underdog on the road against Utah. It’s a tough place to play, but the Utes have given up more than 200 yards in three games this season, all losses. We think the Ducks can rely on that ground game on the road.

The Cowboys have allowed just 23 total points in a three-game win streak since the Iowa State loss. These teams have split the last four meetings, and the Red Raiders are 3-4 ATS as an underdog.