In our Week 1 Picks Against the Spread, we had Kent State covering the 29.5-point spread against Texas A&M. So, of course, the Golden Flashes trailed 41-10 and missed field goals of 25 and 24 yards in the final minutes that would have provided the cover.

We would say “lesson learned,” but it won’t be the last time it happens this season. We’re on to Week 2, where there are two matchups between ranked teams with No. xx Ohio State vs. No. XX Oregon and No. XX Iowa at No. xx Iowa State.

Each week, SN College Football writer Bill Bender will pick the Top 25 games against the spread. Games against FCS opponents are not included, so no Alabama, Oklahoma or Clemson this week.

With that in mind, our picks for Week 2:

Week 2 picks against the spread

Coastal Carolina beat Kansas 12-7 in 2019 and 38-23 in 2020, and the Chanticleers have emerged as an up-and-coming program ever since with Jamey Chadwell. Kansas broke a 19-game losing streak under first-year coach Lance Leipold last week, but it took a final-minute TD against South Dakota to do so. The Jayhawks failed to generate a running game, averaging just 2.1 yards per carry. Coastal Carolina will exploit that, and KU will have trouble keeping up. We still think the spread is too high.

Pick: Coastal Carolina wins 40-16 and FAILS TO COVER the spread.

The Gators allowed FAU to get a back-door cover last week, and South Florida is coming off a 45-0 loss to N.C. State. The Gators will stuff the run and force mistakes, and they will look to be sharp heading into the Week 3 matchup with Alabama. This week, Florida won’t hit the breaks.

Kayvon Thibodeaux’s status makes this a tougher pick. Without him, the Ducks won’t be able to put enough pressure on Ohio State quarterback C.J. Stroud, who struggled in the first half against Minnesota. The Buckeyes are 6-4 ATS as home favorites, and the Ducks have just one double-digit loss the last two seasons. The Buckeyes win at home, but can they cover?

The Hokies are ranked after a big ACC Coastal Division win against North Carolina, and now they have to avoid a letdown against the Blue Raiders. Virginia Tech is 10-11 ATS in non-conference games under Justin Fuente.

Pick: Virginia Tech wins 35-17 but FAILS TO COVER the spread.

The Irish are working on a short week, and Toledo is a capable Mid-American Conference team. Notre Dame is 5-0 against MAC teams under Brian Kelly, however, and they have outscored those teams 234-80. Only one game was decided by less than double digits. Look for Notre Dame to shore up the running game, and the defense tightens up in the home opener. Get this line now before it bumps up.

Georgia’s defense flexed in the opener against Clemson, and the offense should get going against the Blazers, who are 5-6 ATS as an underdog the last four seasons. The Bulldogs cruise, but UAB slips under the cover with a late field goal.

Pick: Georgia wins 34-9 but FAILS TO COVER the spread.

The Aggies were lucky to cover in Week 1, and now they meet an old rival from the Big 12 days. The offense rolled up 597 yards in Week 1 but also committed five turnovers. If the Buffaloes can maintain success with a ground game that averaged 5.7 yards per carry in the opener against Northern Colorado, they’ll have a chance to cover. We think the Aggies limit the mistakes in a cleaner victory.

We could see this line moving down a bit. Penn State pulled off a big win against Wisconsin, and the Nittany Lions should be able to get the passing game going against the Cardinals. Ball State is 9-1 ATS in their last 10 games as an underdog.

Pick: Penn State wins 33-14 but FAILS TO COVER the spread.

It’s arguably the biggest game in this rivalry’s series, and Iowa State gets the GameDay spotlight. The Hawkeyes have won the last five meetings, and the last two games have been defensive struggles. The Cyclones break through, but it’s going to be close.

Pick: Iowa State wins 27-24 but FAILS TO COVER the spread.

Wisconsin is 34-1 all-time against MAC opponents, and this feels like a get-right game after the tough loss to Penn State. Look for Graham Mertz to get back track in the passing game, and the defense swarms.

The Longhorns covered in Week 1 in an impressive debut, but they renew a rivalry with the Razorbacks, who are 7-3 ATS as an underdog with second-year coach Sam Pittman. This is the first meeting since the 2014 Texas Bowl. We trusted Texas last week. We’re going to do it on the road, too.

Journeyman quarterback Chase Brice will get the start for Appalachian State against the Hurricanes. The Mountaineers had two running backs hit 100 yards in the opener. The Hurricanes need to bounce back, but they are at home and D’Eriq King gets rolling in the second half.

The Tar Heels are heavy favorites despite a Week 1 loss, and they should get back on the right track against Georgia State, which was thumped 43-10 by Army in Week 1. The Panthers averaged just 1.7 yards per carry. The Tar Heels work out the kinks on offense to get back on the winning side.

Pick: North Carolina wins 39-17 but FAILS TO COVER the spread.

The Utes have won nine straight in the series, and that included a 30-12 victory in Provo in 2019. BYU’s Jaren Hall and Utah’s Charlie Brewer played well in their first starts last week, and this one will come down to which quarterback doesn’t make the big mistake. The rivalry returns in a big way.

Stanford managed just 39 rushing yards in a Week 1 loss to Kansas State, and the Trojans have won the last two home meetings in this series by an average of 21.5 points. The Cardinal hangs around enough to cover.

UNLV lost a double-overtime thriller against Eastern Washington, but the Rebels established a running game with Charles Williams, who had 172 yards rushing. Arizona State will get what they want with their dominant running attack, but keep in mind the Sun Devils are 0-6 ATS as a home favorite under Herm Edwards.

Pick: Arizona State wins 43-14 but FAILS TO COVER the spread. 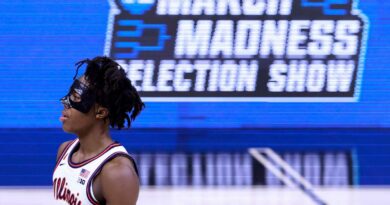 March Madness: These will be the No. 1 seeds in NCAA Tournament on Selection Sunday