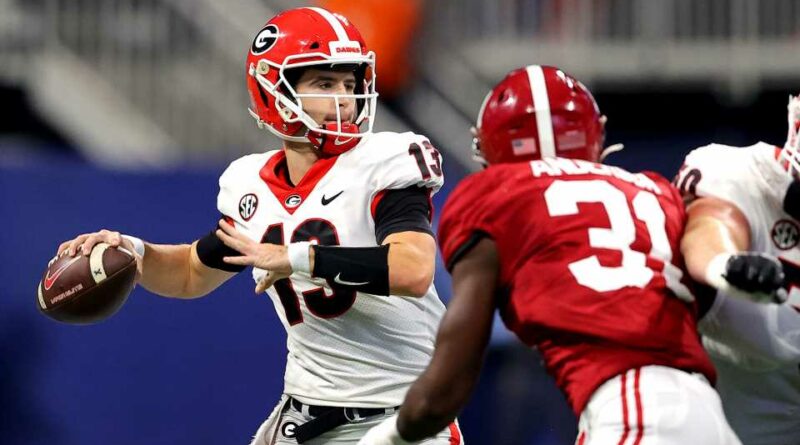 The one team everyone thought was unbeatable all season long proved it is, in fact, fallible.

Top-ranked, 12-0 Georgia entered Saturday’s SEC championship as a 6.5-point favorite over No. 3 Alabama. The Bulldogs boasted the clear No. 1 defense in the country with an offense that was efficient and effective. None of that mattered against Nick Saban, Bryce Young and Alabama, which beat Georgia 41-24 to give the Bulldogs their first loss of the season.

That raises the question: What happens to Georgia now? More specifically: Does the Bulldogs’ loss to Alabama create a potential path to the playoff for 11-1 Notre Dame and 11-2 Big 12 champion Baylor?

Sporting News breaks down how, even with its loss, Georgia should not worry about getting jumped by either of Notre Dame or Baylor following conference championship weekend:

Georgia has the most wins. The Bulldogs’ record will likely be more closely compared to Notre Dame’s considering both teams have one loss, but the Bulldogs have the added benefit of playing during conference championship weekend while the Fighting Irish remained idle.

The Bears are the only team that can boast a conference championship, but that likely won’t amount to much considering they have two losses. In the playoff era, only one prerequisite has remained constant: You cannot lose two games. That unwritten rule cost Penn State (2016) and Ohio State (2017) and will likely cost the Bears in 2021.

Again, Georgia ranks ahead of Notre Dame and (especially) Baylor in terms of best loss. Alabama, ranked No. 3 at the time it beat Georgia, will undoubtedly be the top-ranked team in the playoff on Sunday, which will stand out prominently for the Bulldogs’ playoff record. Notre Dame also has a loss against a playoff opponent in No. 4 Cincinnati, but lost that game at home when the Bearcats were ranked No. 7 in the country.

Meanwhile, Baylor avenged one of its only two losses of the year when it beat No. 5 Oklahoma State in a rematch of its 24-14 defeat earlier in the season, ranked No. 19 at the time. Had that been the Bears’ only loss of the year, they very well could have jumped into the top four — or, at least, had a better claim to move up. But that Week 10 loss to a 3-9 TCU team is killer. Even if it was Baylor’s only loss, it simply doesn’t compare to Georgia or Notre Dame’s.

The question remains: Is that going to be enough for a two-loss Baylor to pass a Georgia team that has set an AP Top 25 record as the consensus No. 1 team eight weeks in a row?

This is where things get tricky. Georgia has the worst strength of schedule by far, ranking six spots behind Notre Dame (50) and 13 spots behind Baylor (43). But it clearly has the best strength of record, which ESPN defines as, “the probability that an average top-25 team could achieve a team’s record given the particular schedule that team has faced.” Basically, it measures the likelihood an average top-25 team could have the same record against a team’s given schedule.

What does that mean? Georgia has a weaker overall strength of schedule but has played well enough that no other team — Notre Dame and Baylor — could claim as good a chance of remaining undefeated against it. Indeed, before Saturday’s game, Georgia had by far the highest-ranked margin of victory over any other team in the country, per TeamRankings.com: 32.4 ppg, compared to Notre Dame (17.0 ppg) and Baylor (9.9 ppg).

ESPN has yet to update its FPI rankings following Saturday’s games but, entering conference championship weekend, Georgia clearly had the top FPI rating in the country, which ESPN defines as, “a predictive rating system that uses advanced analytics to evaluate team strength.” So the higher the rating the stronger the team.

Alabama is making the playoff. Ohio State, which has two losses and was idle on Saturday, won’t. The other teams to make the playoff in Cincinnati and Michigan — if it wins the Big Ten championship — will be the other two teams in the playoff. Ultimately, that’s what it comes down to: Georgia has been so dominant for so long that no outcome on Saturday could have kept it out of the playoff.

Notre Dame has only the one loss, and Baylor has a Power 5 conference championship. But that ultimately doesn’t match up against Georgia’s sustained season-long dominance.

Nick Richards steps up to lead No. 19 Kentucky to overtime win against No. 4 Louisville

Broncos’ Courtland Sutton gives Drew Lock a vote of confidence: QB is ‘on a different level’

Heisman Watch: Can DeVonta Smith hold off his own teammates?