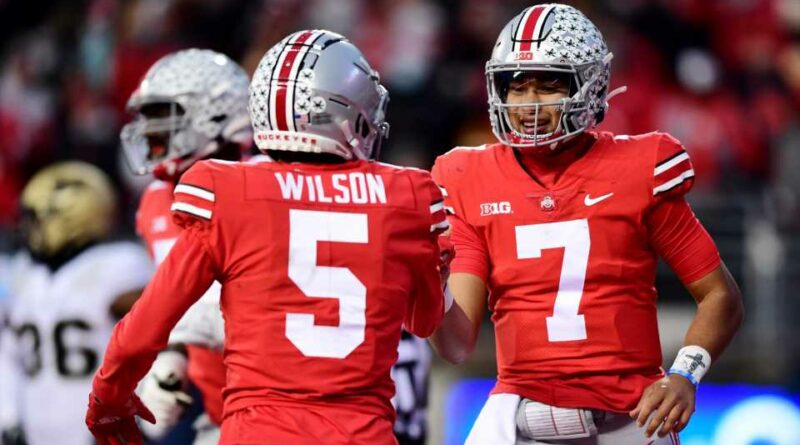 Georgia is the only Power 5 unbeaten team left.

The Bulldogs look like the best bet to make the College Football Playoff. Cincinnati, one of two unbeatens in the Group of 5, still is in the mix. The rest of the top-10 contenders have one loss.

The third set of CFP rankings will be Tuesday. How will they sort out that one-loss mess?

The Big 12 took the latest hit when Oklahoma suffered a 27-14 loss to Baylor in Week 11. The Sooners might not fall down the rankings much, but the heirachy of top-10 teams changes. The Big Ten still has a one-loss logjam with Ohio State, Michigan State and Michigan to be solved over the next two weeks, too. Cincinnati got help with the Sooners’ loss. Will they get more in the last three weeks?

Each week, we will break down the playoff picture based on how we think the CFP committee should rank the top-10 teams. As we saw last week, the committee might not agree with these rankings.

BENDER: OU will not be forgiven this time by CFP committee

Future results are not projected:

Four in the College Football Playoff

Tennessee scored a first-quarter TD and notched a season high in points against the Bulldogs. Georgia still mandhandled its rival 41-17 and had the support of a rushing attack that piled up 274 yards on 6.7 yards per carry. Georgia has four victories against ranked opponents and capped off a perfect regular season in SEC play. There remains no doubt who is No. 1 for now.

Remaining schedule: vs. Arkansas, at Auburn

Alabama covered a 51.5-point spread in a 59-3 victory against New Mexico State in a tune-up before the season-ending stretch against Arkansas and Auburn. Bryce Young finished 21 of 23 for 270 yards and five TDs in a stat-padder performance, and Jameson Williams continued a brilliant season with six catches for 158 yards and three TDs. There is nothing new to be learned about the Crimson Tide in this win that the next two weeks won’t clarify. Alabama will stay in its No. 2 spot as a result.

Oregon and Washington State were tied at halftime, but the Ducks pulled away in the third quarter and held on for a 38-24 win. The CFP committee could get tricky and put Ohio State at No. 3, but we’ll hold to Oregon’s head-to-head victory on Sept. 11. Anthony Brown continues to evolve as a dual threat. He finished with 135 passing yards and 123 rushing yards, and the tag-team of Travis Dye (88 yards, TD) and Byron Cardwell (98 yards, 2 TDs) is more than enough support in the running game. Kayvon Thibodeaux also came up wiht a clutch red-zone sack. The biggest Pac-12 test comes in Week 12 at Utah.

Spoilermakers? Not so much. Ohio State hammered Purdue 59-31 to add a second victory against a ranked opponent to its resume. The committee favors the Buckeyes ahead of the Bearcats, and it’s going to stay the way Tuesday. Ohio State racked up 386 yards in the first half and built a 45-17 lead. C.J. Stroud finished 31 of 38 for 361 yards and five TDs. The Buckeyes racked up 624 yards in their most-complete offensive performance in a month. Ohio State gets top-10 showdowns against Michigan State and Michigan the next two weeks. The Buckeyes remain the team to beat in the Big Ten.

There is some “score shaming” going on with the Bearcats. Cincinnati led South Florida 31-7 in the third quarter, but the Bulls cut the lead to 10 in the second half in a 45-28 loss. Does the score matter? It’s a perception battle Cincinnati might not win the American Athletic Conference, and this was the third straight week the Bearcats did not cover a large spread. Among the 10 teams Cincinnati has beaten, only Notre Dame has a Power 5 win. Does that top-10 victory against Notre Dame mean enough? The reality is Cincinnati will need one of Alabama, Oregon or Ohio State to lose.

Unlike the CFP committee, we’re still honoring the Spartans’ head-to-head victory against the Wolverines. This is a problem that will take care of itself when Michigan State and Ohio State meet at Ohio Stadium on Saturday. The Spartans displayed a balanced offense in a 40-21 blowout against Maryland. Kenneth Walker III rushed for 143 yards and two TDs to continue his Heisman push, and Payton Thorne passed for 287 yards and four TDs. The Spartans are the last Big Ten school to win on the road at Ohio State; a victory that led to a CFP berth in 2015. Will history repeat itself?

Michigan coach Jim Harbaugh deserves credit for leading Michigan to a clutch clutch 21-17 road victory at Penn State. Cade McNamara threw the game-winning TD pass to Erick All, and Hassan Haskins rushed 31 times for 156 yards. Aidan Hutchinson and David Ojabo combined for five of the Wolverines’ seven sacks. Michigan can set up a battle of 10-1 teams against Ohio State if both teams take care of business this week. The Wolverines close their road schedule at Maryland.

Notre Dame is starting to wiggle into the playoff conversation. The Irish did not have much trouble with Virginia, which did not have quarterback Brennan Armstrong (ribs). Notre Dame cruised to a 28-3 victory, its fourth straight double-digit victory. The Irish are still hampered by the loss to Cincinnati, and they would need the Big Ten East champion to lose a potential matchup with Wisconsin in the Big Ten championship game. Remember, the Irish manhandled the Badgers 41-13. Notre Dame is not out of the mix yet.

The Cowboys beat Baylor. That’s going to be a key piece in potential tie-breakers for the Big 12 championship game. Oklahoma State continued what has become a dominant defensive stretch in a 63-17 blowout against TCU. The Cowboys have allowed just 7.7 ppg. in three wins since the loss to Iowa State on Nov. 23. Oklahoma State still has to prove it by breaking a six-game losing streak in Bedlam, but the Sooners have not looked good in their last two road games. The CFP committee will respect Oklahoma State’s resume a little more; at least for this week.

The Sooners lost 27-14 to Baylor in a loss that puts their CFP hopes on blast. Sure, each of Oklahoma’s four CFP runs since 2015 have come after a loss in conference play, but the committee did not like them all that much with an unbeaten record. Baylor rushed for 296 yards, and Lincoln Riley toggled quarterbacks Caleb Williams and Spencer Rattler through a shocking loss to the Bears. The Sooners still control their destiny to get back to the Big 12 championship game, but they are near the back of the one-loss line of contenders for the CFP.

Tom Brady, self-proclaimed Patriots fan, sounds at peace with his decision to leave for Buccaneers